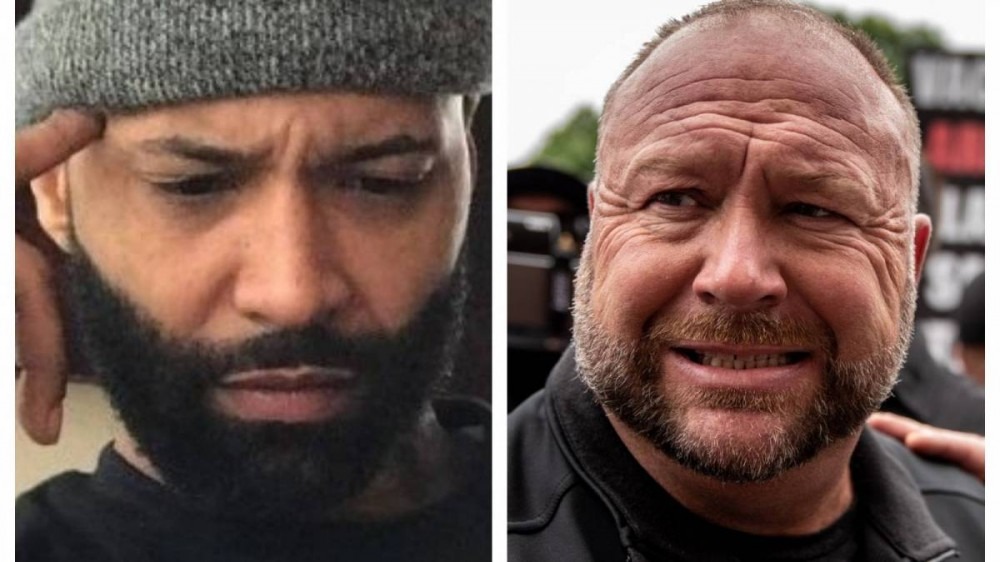 Far-right radio host and conspiracy theorist Alex Jones went on a spirited tirade against Joe Budden after the former Slaughterhouse rapper criticized comedian Andrew Schultz for interviewing him and referred to him as the “KKK guy.”

On Saturday (July 3), Jones posted an InfoWars video in which he verbally eviscerates Budden for his comments.

“You need to be slapped upside your dumb ass head for your own good,” he begins. “I’m not saying I’m going to do that. My point is, what the hell’s your problem!? You don’t even know who I am, but you get the talking point for trying to police things.’”

Elsewhere, he added, “Burn in hell!”

Alex Jones continued then accused Joe Budden of being racist.

“I will not sit there and have racist Black people who are feeding at the corporate new world order, eugenics, genocide, death cult tit, lecture me about how I’m bad because I’m white,’ he said. “Just because you are this Black person paid by the corporate media to spew racism to divide this country in the world.

“I didn’t do anything to you. I don’t owe you anything. And you are despicable lying about me.”

In 2018, Kanye West was embraced by Jones for his support of Donald Trump and conservative commentator Candace Owens.

“@kanyewest I admire your bold moves against the thought police,” Jones tweeted at the time. “And if you want to see these control-freak vampires really go crazy, please join me on my broadcast!”

But Budden is on the other side of Jones’ wrath and became a trending Twitter topic on Sunday (July 4) as people struggled to wrap their head around how he ended up beefing with someone like Jones.

This was me after I heard Alex Jones respond back to Joe Budden ..😩 pic.twitter.com/Qq7KqqTcRu

I know why Alex Jones & Joe Budden beefing rn but I still can’t wrap my head around it bc what? WHAT?! pic.twitter.com/NhbQsByGsc

Y’all cheering for Alex Jones in a beef with Joe Budden when he says Blacks have low IQ? Couldn’t be me! pic.twitter.com/7Q288UwD1Q

So… Joe Budden and Alex Jones got beef. How—? pic.twitter.com/ryf9ft9HXY

Alex Jones goes off on Joe Budden for saying he’s a racist pic.twitter.com/32vVun2Hso

Wait… did I hear Alex Jones say “Wigger” when he was ranting about Joe Budden??? pic.twitter.com/QoPyZBxBCF

Whoever thought Alex Jones would be the one to bar Joe Budden up? Lmao

Joe Budden VS Alex Jones. This is my favorite part of the simulation.😂😂😂

Joe Budden pointed out how suspected racist white show hosts like Andrew Schulz aka ‘Alt-right Andy’ & Joe Rogan can bring on suspected white supremacists like Alex Jones, who is rumored to be involved in the Jan 6 Capitol attack, & get no backlash. And now Alex Jones is whining. pic.twitter.com/nqpjfqzeUo