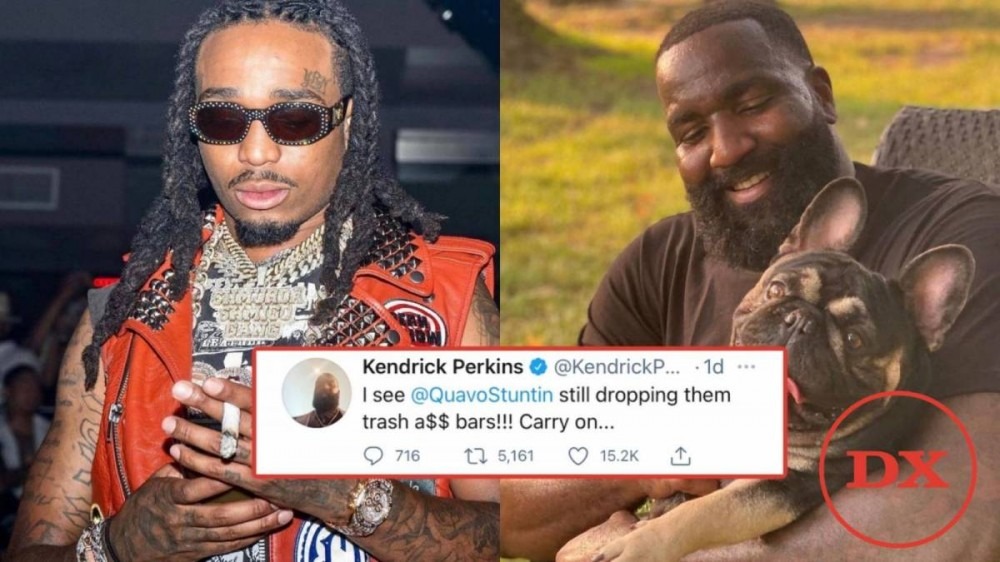 Quavo is harnessing each and every publicity opportunity coming his way to hype up the Migos’ forthcoming Culture III project and now his social media-based spat with former Boston Celtics’ center Kendrick Perkins is becoming his latest promotional springboard.

Perk seemingly sent the first shots on Twitter Sunday (June 6), calling Quavo out ahead of the Migos’ comeback album and trolling the Quality Control rap star for his unique name-dropping flow — which pit Perkins as the butt of an ill-received joke in a punchline from bars on his 2018 Huncho Jack collaboration album with Travis Scott.

“I see @QuavoStuntin still dropping them trash a$$ bars!!! Carry on…” Perk wrote in the tweet. Quavo quickly responded with a clap back of his own on Monday, sharing a candid screenshot of the former NBA champion anchored by a blatant plug for C3.

Atlanta rapper Jose Guapo inserted himself within the conflict also. But what started out as an effort to both defend Quavo and play peacemaker and spearhead a path to squashing the beef with KP only resulted in a semi-hostile back-and-forth.

“hey we respect you for who you are as a man mr. @KendrickPerkins but stop speakin on my brother @QuavoStuntin whether he like it or not I DON’T so out of respect don’t tweet nothin wit his Twitter name in it,” Guapo wrote in part.

Perk wasn’t having it at first, though, and stood his ground in defense of his tweet crimes against Quavo.

“With all due respect homeboy you can miss me with all that. That man mentioned my name first in one his songs…so as a MAN I have to the right to say something back. Real Talk!” Twitter fingers Kendrick wrote.

Jose Guapo tried to smooth things over, but also couldn’t let Perk live for his current Avi, so he aired out his grievances once and for all and chalked up their differences by issuing a call-to-action for unity in their shared mission of getting money.

“as a man you do that’s why I told you it’s respect first but he ain’t mentioned you we respect what you doing for the culture we can get more money together than against each other but ion like ya outfit in your profile big perkins,” Guapo tweeted stamped with a crying laughing emoji.

We can all now hopefully expect some closure on the situation, possibly in the form of the beef being squashed, as both Kendrick Perkins and Jose Guapo agreed to disagree — paving the way for a potential Instagram live air-out session.

“I’m with you bro but tell him to keep my name out his mouth and we all good bro,” Perk concluded.

“will do. let’s set up a public ig live interview where y’all any differences y’all had or still got FOR THE CULTURE.” Jose proposed in his final reply.

will do. let’s set up a public ig live interview where y’all any differences y’all had or still got FOR THE CULTURE.

This isn’t the first time Kendrick Perkins has been publicly at odds with an A-list rapper. In fact, in 2018 Drake and Perk got into multiple heated arguments courtside at Game 1 of the NBA Playoffs Eastern Conference Semifinals as the Toronto Raptors took on the Cleveland Cavaliers.

“I was f—ing with Serge (Ibaka), my old teammate,” Perkins said after the game. “I wasn’t talking to [Drake]. He said something slick so I said something back: ‘Sit your ass down and watch the game.’”

On the other hand, Quavo remained focused on his plan of attack, wasting no time and swiftly delivering the tracklist for Culture III in an IG post on Tuesday.