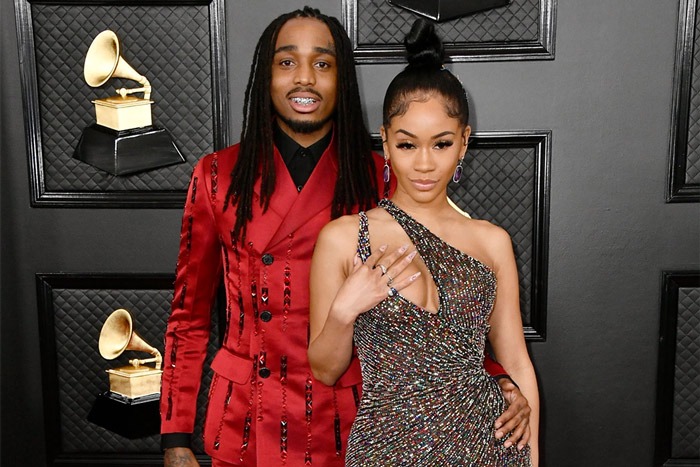 The Migos heartthrob went all out to surprise his girlfriend. He had a violinist wake her up in her hotel room and serenade her with a song close to her heart. In the video, Saweetie is seen in bed while her hit “My Type” is performed, much to Saweetie’s surprise. When she realizes the song, she starts laughing and rapping along while Quavo zooms in on her face.

Quavo got a violinist to wake up Saweetie & they played “My Type” 😍😭 pic.twitter.com/U7GrvBzPoH

The video was posted on Quavo’s Instagram Story before being deleted. “My Valentines,” he captioned it.

The “ICY GRL” can also be seen in Migos’ new video for “Give No Fxk” with Young Thug and Travis Scott, which dropped Friday.

The couple, who met on set of Quavo’s “Workin Me” video, has been together for about a year-and-a-half. During an interview with Billboard, Saweetie gushed about her boyfriend. “He’s one of my best teachers. He’s so seasoned,” she said. “He has so many accomplishments so he just teaches me in the studio, with my writing, with everything that comes with the game, so I really appreciate him.”

Saweetie recently dropped the video for “Sway With Me,” a collaboration with GALXARA off the all-female soundtrack to Birds of Prey.