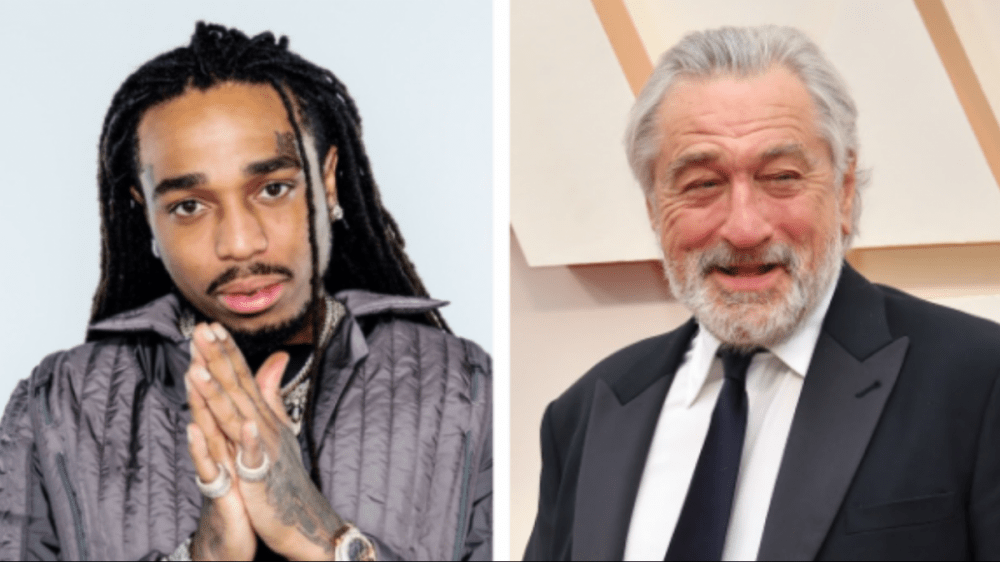 Quavo recently landed the role of a lifetime when he was cast in the upcoming Wash Me in the River movie alongside the one and only Robert De Niro. During a recent interview with Billboard, the Migos member recalled a conversation with the Taxi Driver, Goodfellas and Raging Bull star on set, in which the 77-year-old knew about his rap group’s existence.

“I said what’s up to him,” he said. “I told him I said a line in one of my new songs about the trip I just took and he was just like, ‘For real. M-I-G-O-S, right?’ I was like, ‘Yeah, he’s finna go home and look me up.’ It was too hard. I couldn’t wait to tell my Mom dukes that I’m gonna be on the screen and kicked it with him. He’s a nice dude.”

The Atlanta-bred rapper also described his experience shooting the thriller and what fans can expect from his debut film role.

“I’m a ruthless gangster, ruthless killer named Coyote,” he said. “It’s just an honor to be on the screen with Robert De Niro, Jack Huston and John Malkovich. I’m just blessed and I can’t wait for y’all to see it. It’s a very action-packed movie. I had fun doing it. I stayed in Puerto Rico shooting for a whole month grinding. There was some long film days. Them film days are different. It’s like you’re shooting a video all day.”

The Randall Emmett-directed feature also stars John Malkovich, Jack Huston and Willa Fitzgerald, but doesn’t have a release date yet.

In February, Quavo revealed his high hopes for Wash Me in the River and excitement about acting more in the future.

“I honestly think this movie is going to be one of the greatest to come of this time,” he said. “The experience was unbelievable for me, with Robert DeNiro and Jack Huston being so down to earth and making me feel like family. Gonna see me doing some stunts and a lot of what you hear from me in my raps! This is one of my biggest debuts I’ve ever had, and so proud of what we did and to get to work with Randall who’s such an amazing guy — I can’t wait to do more films with him.”

Quavo is better known for his music but does have past roles in Atlanta and Narcos: Mexico, plus he’s also producing a horror film titled The Resort. However, he isn’t the only rapper to appear in the same film as De Niro. Action Bronson also a cameo

alongside the legendary actor in Martin Scorsese’s The Irishman in 2019.