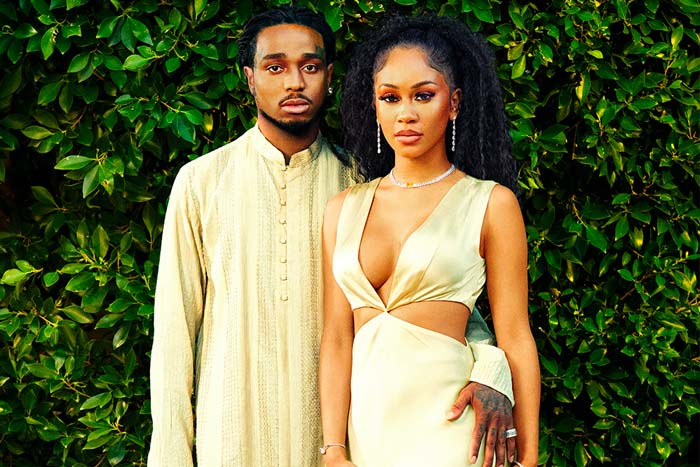 Quavo and Saweetie are sharing their love with the world.

The superstar couple, who has been dating for over two years, poses for the August issue of GQ. The Migos rapper, 29, and “ICY GRL,” 27, weren’t shy to show PDA in the intimate photos, their first official shoot as a couple. Quavo dons a traditional Indian kurta, while Saweetie matches her beau in a silky white gown in one striking photo that could be from their wedding.

In the interview, Saweetie opens up about her longtime crush on Quavo. “He’s always been fine to me,” she tells the magazine. “In a group chat [with friends], I would screenshot his picture and be like, ‘Damn, this ni**a is fine.’ ”

Quavo was first introduced to Saweetie on Instagram. “I seen her on my Explore page,” he says. “I was like, ‘Damn! Who is this?’ So I did my research and I DM her. I was like, ‘How she going to call herself icy and she don’t talk to me?’”

So he slid in her DMs. “I told her, ‘You an icy girl, you need a glacier boy,’” says Quavo. “He sent me the snowflake [emoji],” adds Saweetie, “and I sent him the stir-fry back.”

Quavo and Saweetie Couple Up in GQ

Quavo and Saweetie Couple Up in GQ

After flirting over Instagram and on the phone, Quavo took a shot and invited Saweetie to a “rowdy backyard function,” which she compared to Tupac’s “I Get Around” video. “That wasn’t my environment,” says Quavo, who says Saweetie ghosted him because of it.

Their first date was at Atlanta’s famed Magic City strip club where a fight broke out and everyone went scrambling for the exits. The couple lost each other in the pandemonium. “I didn’t know if it was on some gang shit, so it was like, ‘Let’s get to the car!’” says an embarrassed Quavo. “All this time, I forget I’m having a date! She catches up and cussed me out in front of Magic City.”

When they’re not watching “Ozark,” the couple is learning from each other. “Growing up I struggled with communication, and he has taught me to be a better communicator,” says Saweetie. “I feel like I’m growing and I’m maturing because of him–not the music, not Saweetie, but Diamonté…. I don’t know how I would be as a person if I would have never met him.”

Quavo can be himself when he’s around her. “When she talk to me and when we started talking to each other, the Saweetie shit go out the window and the Quavo shit go out the window. I give her Quavious. I give her what my mama calls me,” he says. “I don’t let people inside my life, and I let her inside. And she’s helping me grow up. She’s showing me how to love a woman.”

Migos is now working on the long-awaited third installment in their Culture series. “The vibe on the album is more of Culture, and that’s all I should really share,” says Quavo. “We feel good. We feel new and refreshed.”

Saweetie has her own album Pretty Bitch Music on the way, but the pandemic has put a crimp in her plans. “Artists have been placed in a predicament: Do we release music, even though streaming is down? People aren’t really listening to music. We’re all just trying to figure it out right now. We’ve both talked about putting out mixtapes, but it’s kind of like a gamble.”

Watch the couple put their love to the test in a 44-question couple’s quiz below.