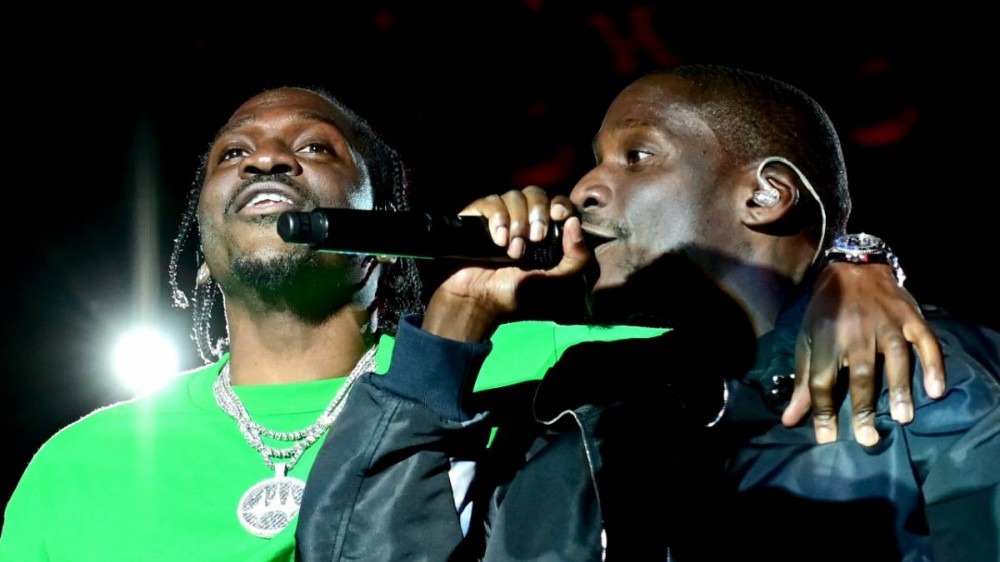 Washington, D.C. – Pusha T and Malice, known collectively as the Clipse, reunited for their first performance in over a decade at their good friend Pharrell’s Something In The Water festival in Washington, D.C. on Saturday (June 18).

During Skateboard P’s headlining “Pharrell & Phriends” set — which also boasted cameos from T.I. and N.O.R.E. — the brothers Thornton produced one of the highlights of the entire three-day festival by hitting the stage to perform “Like I Love You” with fellow special guest Justin Timberlake.

The Virginia Beach duo stuck around and dusted off fan-favorite cuts from their own catalog including “Mr. Me Too,” “Cot Damn” and “Grindin,’” with Malice embracing coke rap bars like “Break down keys into dimes and sell them like gobstoppers.”

Following their performance, Pusha T took to Instagram to celebrate sharing the stage with his brother again. “Want for your brother what u want for yourself,” he wrote while sharing photos of the moment. “‘Harold Melvin without the Bluenote, the past 10 years screaming UNO…then side step back into the DUO.’ – Self.”

Backstage footage before the Clipse’s appearance shows Push and Malice relishing their long-awaited onstage reunion with a jubilant Justin Timberlake.

“It’s so good. We’re back together! Look at us, we’re like an Oreo cookie!” Timberlake jokes. “I’m looking forward to it, man. Yo, you know what’s crazy? It’s been 10 years since y’all been on stage together, but this fall, it’ll be 20 years since we did our joint and we only did it one time. It’s all types of history.”

Clipse enjoyed a legendary run in the ’00s that began with their minimalistic, Neptunes-produced hit “Grindin’” and was followed by three acclaimed albums — 2002’s Lord Willin’, 2006’s Hell Hath No Fury and 2009’s Til the Casket Drops — as well as a slew of cult classic Re-Up Gang mixtapes.

Following the release of Til the Casket Drops, Malice (a.k.a. No Malice) departed the group, shunning his street tales for the spiritual path — a religious reawakening that was chronicled in the 2016 documentary The End of Malice. Pusha T, meanwhile, launched a successful solo career under Kanye West’s G.O.O.D. Music.

“[The feds] were picking up all of our friends at different times,” Malice told HipHopDX of his decision to leave the Clipse. “I had a friend, he just had a baby. He’s wheelchairing his wife who’s holding the baby while coming out of the hospital and ‘bam’ they got him… They were coming for everybody.

Rumors of a Clipse reunion have circulated for years, with the duo even briefly getting back together on Kanye West’s Jesus Is King track “Use This Gospel” in 2019. But only in recent months do Pusha T and Malice appear to be back in a groove, musically speaking.

In March, the brothers reunited on “Punch Bowl” from Nigo’s I Know Nigo album before connecting again on “I Pray For You,” the spiritual finale of Pusha T’s It’s Almost Dry. Their Something In The Water performance is one step closer to a full-fledged Clipse reunion, but only time will tell if that’s on the cards.