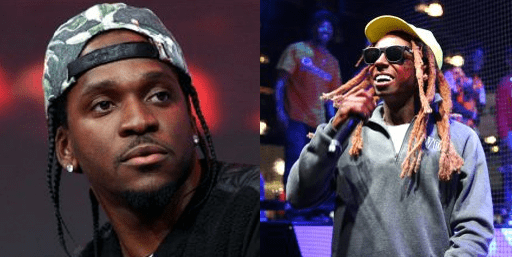 As the NFL gears up for the start of the 2022-2023 season, a new teaser for the upcoming season was released today, August 25. The teaser features cameos from multiple celebrities, but its the unlikely team up between Pusha T and Lil Wayne that have really caught people’s attention.

The teaser shows the two in a gymnasium full of NFL fans. Weezy is hyping the crowd up while wearing a Aaron Rodgers jersey and Push is wearing a Tom Brady Buccaneers jersey while “Still D.R.E.” plays in the background.

It is unknown whether or not Push and Weezy set aside their beef to do the commercial, but their involvement in it is surprising to say the least. Their beef goes all the way back to the early 2000s when it was alleged that Birdman did not pay The Neptunes for their beats. The beef would later evolve with Push dropping the scathing diss “Exodus 23:1,” where he took shots at Wayne, Birdman, and Drake.

He would eventually diss Wayne and Drake again on “Infrared” where he called Wayne a “flash without the fire” and a “multi platinum rapper trapped and can’t retire.” He also called Drake out for his ghostwriting allegations made by Meek in 2015. After Drake responded with “Duppy Freestyle” but it was no match for Push’s response “The Story Of Adidon” where Push revealed that Drake was hiding a son.

Lil Wayne even spoke on his beef with Push in his Drink Champs interview with N.O.R.E. and DJ EFN. Weezy said that he was kind of blindsided by the beef with Push.

“I swear to God I don’t, man,” Weezy said when asked if he knew what started the beef. “I just found out … it was one of those things … you ever see when an athlete gets traded and he don’t know it and he gets traded during a press conference? [Wayne’s friend] was like, ‘What you gonna do? You gonna come back at Pusha?’ I’m like, ‘What you mean? I’d love to do a song with him.’ He like, ‘Nah he dissing you now.’”