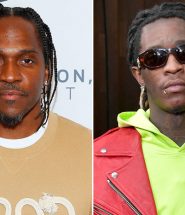 Pusha-T and Young Thug are beefing over a leaked track from Pop Smoke’s album.

The song “Paranoia,” which features Thug, Gunna, and Pusha-T, was supposed to be included on Pop’s posthumous debut Shoot for the Stars Aim for the Moon and finds Pusha reigniting his feud with his Canadian rival. On his leaked verse, the G.O.O.D. Music rapper disses Drake’s patois and references a 2018 incident during Pusha’s Toronto show where fans tried to rush the stage. He even threatens to buy a house in Mississauga near Drake’s hometown.

“You know reality bites / It’s chess not checkers / Those empty threats only sound good on your records,” raps Push. “If the patois is not followed by blocka / It’s like marked for death Screwface without the choppa / Let ’em rush the stage when you made like Sinatra / Only to hide the blade, flyin’ back through LaGuardia / I might even buy a home out in Mississauga.”

Upon hearing Pusha come at Drake, Thug took to his Instagram Story on Monday night to address the verse, saying he and Gunna were unaware that Pusha would be dissing Drake and that he wanted no part in their beef.

“I don’t respect the pusha t verse on the song with me and gunna cause I don’t have nun to do with y’all beef nor does Gunna, and if I knew that was about him I would’ve made changes on our behalf,” he said before adding, “This rapper shit so gay.”

Young Thug says he doesn't respect Pusha T for bringing his beef with Drake into a song with artists who had nothing to do with it. pic.twitter.com/eeBWqgVGkd

Pusha-T responded to Thug on Tuesday morning, saying that no one was aware of the content of his verse except for Drake. “Don’t feel bad, NOBODY knew what the verse was abt,” he said. “The label heads that stopped it didn’t even know. They ONLY ASSUME because HE TOLD them! The same way he TOLD abt the Ross ‘Maybach 6’ verse. And If HE’LL TELL record executives abt rap verses, God only knows what else HE’LL TELL! I don’t deal with Police Work, Police Rappers or Police Ni**as!!!”

SUGGESTS DRAKE IS A SNITCH

DEMANDS HIS VERSE TO BE REMOVED FROM THE DELUXE ALBUM pic.twitter.com/HWd2zByLzB

He also told Thug that he personally requested for him to be added to “Paranoia.” “You were the last verse added to the song and that’s ONLY because I requested YOU!!” he said, while dismissing Thug’s validation. “I WOULD NEVER look or need YOUR respect for what is it I bring to this rap game!!”

But the song is unlikely to get an official release. Pusha told his manager Steven Victor, who also manages Pop Smoke, to remove his controversial verse from Pop’s deluxe album “to avoid any confusion that may take away from This amazing body of work!”