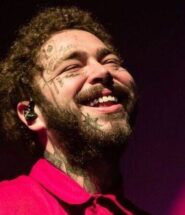 West Hollywood, CA – Post Malone has accomplished more in his relatively brief career than most artists do in a lifetime. With millions of album sales and numerous No. 1 Billboard Hot 100 hits, the diamond-selling rapper/singer can pretty much collaborate with whoever he wants at this point. But there’s at least one person who wouldn’t get the Posty stamp of approval — 6ix9ine.

While hounded by paparazzi in West Hollywood earlier this week, Post was asked if he’d ever work with the polarizing personality to which he said, “Work with him? Chances are no.”

Post’s answer isn’t surprising when considering 6ix9ine’s soiled reputation in the music industry. The 24-year-old was arrested in November 2018 on racketeering charges and agreed to cooperate with the federal government in exchange for a reduced sentence. In October 2019, the controversial rap figure took the witness stand during the trial of Nine Trey Gangsta Bloods Aljermiah “Nuke” Mack and Anthony “Harv” Ellison.

As a result of his testimony, both were sentenced to several years in prison and 6ix9ine was allowed to leave the Queens Detention Facility amid COVID-19 concerns last April.

Although he’s off house arrest, he remains under federal probation for the next few years. Despite the feds’ watchful eye, 6ix9ine hasn’t stopped trolling other rappers on social media nor has he stopped rapping about nefarious activities in his music. Most recently, the rainbow-loving rapper shared a snippet of a forthcoming song to his Instagram account that included lyrics such as, “Are you dumb?/You ain’t spin the block, you a damn lock. Suck a dick/You ain’t kill shit, you got ya n-gga shot/You ain’t feelin’ shit ’cause we was killin’ shit.”

Shortly after 6ix9ine was released, attorney Dawn Florio promised her client wouldn’t beef with other rappers or troll online. Just last weekend, he confronted Meek Mill outside of an Atlanta club and attempted to reel him into some kind of altercation, evidence federal probation can’t stop 6ix9ine from being 6ix9ine.