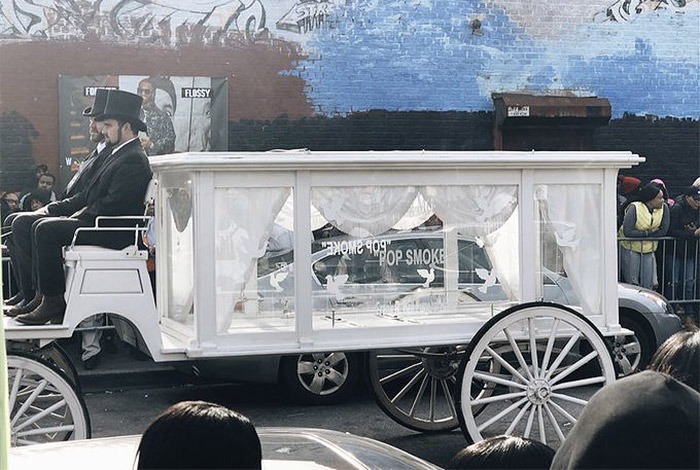 Pop Smoke was laid to rest in Brooklyn on Thursday.

Family and friends turned out in droves to celebrate the 20-year-old rapper’s life during a massive funeral procession in Canarsie. A white horse-drawn carriage made its way through the streets as fans lined up on the sidewalks to pay their respects to the fallen star.

The black casket with glass windows and white curtains traveled past a mural honoring Pop Smoke, while 50 Cent’s Versace-wrapped Lamborghini was also part of the procession.

The energy in BK is CRAZY! #PopSmoke’s hearse is at its final stop by Remsen Ave. You can hear the crowd screaming “Woo,” Pop’s mom came out again, & his close friends pop’d a bottle for him and started dancing. ✨ “You can not say Pop & forget about the Smoke!” 🙏🏾 #RIPPOPSMOKE pic.twitter.com/Zgbhc08ULY

At one point, Pop Smoke’s music blared from a speaker alongside a hearse as fans popped champagne and danced to his songs including “Invincible.” His mother waved to fans who chanted “Woo!” as the carriage drove past them.

Last weekend, Pop Smoke’s family honored him during a private ceremony. After today’s procession, he will be laid to rest in a Brooklyn cemetery.

“The family of Bashar ‘Pop Smoke’ Jackson would like to express our sincere gratitude to everyone for your support,” the Jackson family said in a statement last month. “Every prayer, call, and act of kindness is deeply appreciated as we mourn the loss of our son, brother, and friend.”

Pop Smoke, born Bashar Barakah Jackson, was shot and killed after four men broke into his Hollywood Hills home on Feb. 19. The investigation into his murder is ongoing. It’s unclear if he was the victim of a random robbery or if he was targeted. No arrests have been made.

50 Cent said he plans to keep his music alive by releasing a posthumous album. He has called on big names including Drake, Chris Brown, Post Malone, and Roddy Ricch for the project, which is due in May.