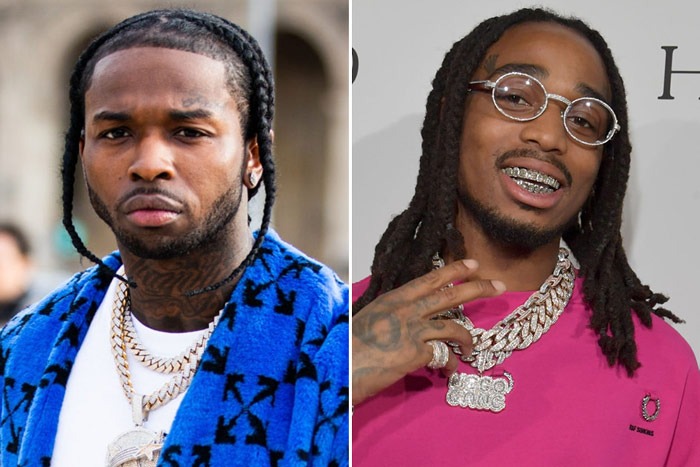 Pop Smoke and Quavo collaborated on “Shake the Room,” but they had even more in store.

Prior to his death, the Brooklyn MC revealed that he and the Migos rapper were recording a joint mixtape. In fact, they had already completed nine songs for the project, which was named Huncho Woo.

“Me and Quavo got like nine songs for real,” Pop Smoke told Spotify’s RapCar in a newly-surfaced clip. “You never know. You might just be hearing a Huncho Woo mixtape coming out or some shit like that. You know what I’m saying? Just stay tuned man. Woo shit shoot for the stars.”

It’s unclear if their joint effort will see a release, but their collaboration “Shake the Room” can be heard on Pop’s Meet the Woo 2, which is currently No. 8 on the Billboard 200. The mixtape saw an 11% increase in sales (40,000 equivalent album units) following his death.

Quavo paid tribute to his friend in the wake of his passing. “Got To Kno This Kid! Very Talented Humble Respectful And Appreciative,” he wrote. “Always Ask Questions Big Sponge To Knowledge Fast Learning Young Boss And The Huncho Was Here To Share That Anytime You Called Me! R.I.P.”

Police continue to investigate the murder of Pop Smoke. Four men in hoodies broke in and shot the 20-year-old rapper at his rented Hollywood Hills home on Feb. 19. It’s unclear if he was the victim of a random robbery or if he was targeted. There have been no arrests.