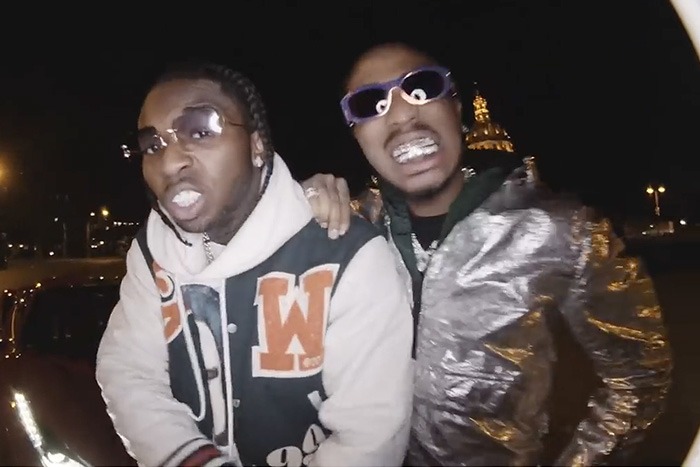 The late rapper teams up with Quavo in his posthumous video for “Shake the Room,” a standout off his last mixtape Meet the Woo 2. The clip, directed by Virgil Abloh for Off-White, was shot in Paris and features grainy footage of Pop and his squad riding around the streets of Paris in a red Ferrari. He and the Migos rapper flaunt their lavish lifestyle at a Parisian restaurant where they toast while partying with patrons.

“This video is real life footage. This is barely a ‘video shoot,’” reads the intro, while the video ends with a dedication to Pop: “In loving memory Pop Smoke forever.”

Pop and Quavo were working on a joint mixtape called Huncho Woo prior to his death last month and had already completed nine songs for the project. “Me and Quavo got like nine songs for real,” Pop told Spotify’s RapCar. “You never know. You might just be hearing a Huncho Woo mixtape coming out or some shit like that. You know what I’m saying? Just stay tuned man. Woo shit shoot for the stars.”

Police continue to investigate his murder. Four men in hoodies broke in and shot the 20-year-old rapper at his rented Hollywood Hills home on Feb. 19. It’s unclear if he was the victim of a random robbery or if he was targeted. There have been no arrests.

50 Cent has also announced plans to keep his music alive by executive producing his album. He has called on big names like Drake, Post Malone, and Chris Brown to help finish the project, which is tentatively due in May.

Meanwhile, Drake took to Instagram to show off his private plane designed by Virgil as part of Abloh Engineering. The giant 767, dubbed “Air Drake,” is painted sky blue with clouds and features the OVO owl logo and Off-White globe on the tail.