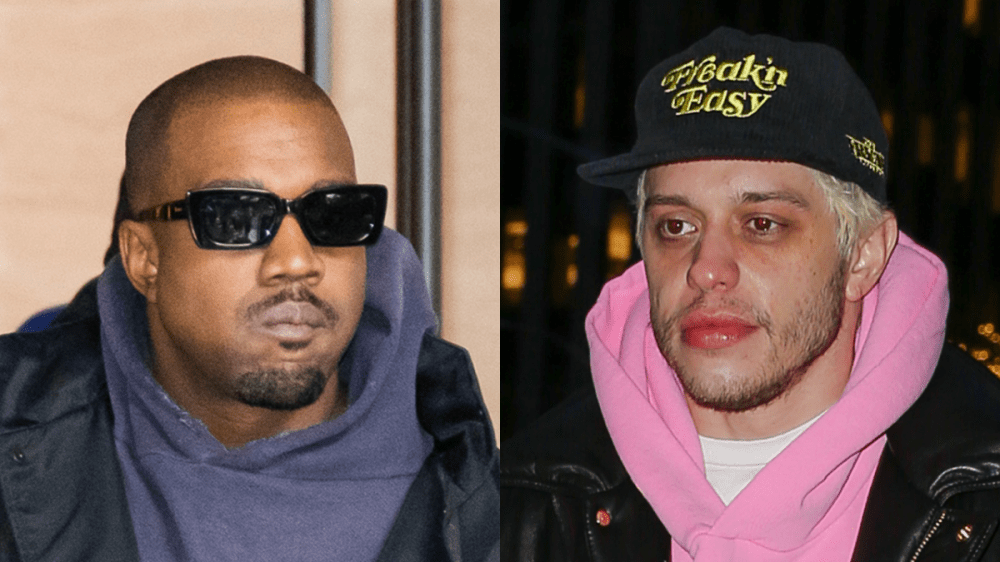 The drama between Kanye West, Pete Davidson and Kim Kardashian is intensifying. On Sunday (March 13), the Yeezy mogul was up in arms after his children didn’t show up at Sunday Service in Los Angeles. As Ye explained in several Instagram posts, he specifically made sure to fly back from Miami and move the event up so he could still make it to Saint’s basketball game.

But for whatever reason, the children weren’t allowed to go. In one of Kanye’s videos, he claimed Davidson was antagonizing him via text, bragging about being in bed with his now ex-wife. Minutes later, The Shade Room uploaded the text exchange — and apparently, Davidson is no longer willing to be Mr. Nice Guy (although his sense of humor is still intact).

“Yo it’s Skete,” he begins, referring to Ye’s nickname for him. “Can you please take a second and calm down? It’s 8am and it don’t gotta be like this. Kim is literally the best mother I’ve ever met. What she does for those kids is amazing and you are so fucking lucky that she’s your kids’ mom. I’ve decided I’m not going to let you treat us this way anymore and I’m done being quiet. Grow the fuck up.”

Ye replies, “Oh you using profanity? Where are you right now,” to which Davidson answers coldly, “In bed with your wife.” He then uploads a photo of himself laying down in bed, sticking his tongue out and throwing a peace sign at the camera.

Kanye West writes back, “Happy to see you’re out the hospital and rehab.” Davidson responds, “Same here. It’s wonders what those places do when you go get help. You should try it. I’m in LA for the day if you wanna stop being a little internet bitch boy and talk. You don’t scare me bro. Your actions are so shitty and embarrassing. It’s so sad to watch you ruin your legacy on the daily.”

Ye then invites Davidson to Sunday Service if he wants to see him, but he suggests meeting after Saint’s game at the Beverly Hills Hotel so they can have a talk, “man to man.”

He continues, “What you are going to your family is dangerous and going to scar them for life. Please handle these matters privately bro. I beg you.”

Kanye again presses him to meet at Sunday Service, but Davidson fires back, “This isn’t public dude. I’m not here for pictures and press, which is obviously all you care about. My offer stands. I wish you’d man up for once in your life.”

Davidson then taps into his empathy and tries to relate to Ye, saying, “Let me help you man. I struggle with mental stuff too. It’s not an easy journey. You don’t have to feel this way anymore. There’s no shame in having a little help. You’ll be so happy and at peace.”

The 28-year-old comedian then claims he’s stopped Saturday Night Live from “talking about or making fun” of Kanye. He also says he “stopped stand up comedians from doing bits about [Kanye] cause [he] don’t want the father [his] girl’s kids to look bad out there.”

He added, “I have your back even though you treat me like shit because I want everything to be smooth. But if you continue to press me like you have for the past 6 months. I’m gonna stop being nice.”

Despite Ye’s public pleas for a reconciliation, he insists he’s not trying to win Kardashian back. He simply wants the chance to be the best father he can be to his four children. In one of Kanye’s latest Instagram posts, he shared a text to Kardashian asking, “Why the fuck is it up to you where my kids are if we so called have joint custody?”

He wrote in the caption, “My dad won’t even call Kim I don’t speak to most of my family because they been allowing this kind of behavior I am in no way trying to get this woman back I’ve moved on with my life.

“I just feel culturally there’s a bunch of white privileged people forcing the upbringing of a bunch of black children I seen a bunch of celebrities speak up against me But ain’t been no one other than Candace Owens that ever said that any of this bitter baby mama behavior is wrong.”

Kanye West’s Instagram spree appeared to start when he found out his eldest daughter North was on TikTok again, which he’s adamantly against. As he wrote in another Instagram post, “My daughter will not be lead by people who don’t believe in God. I am in a very good place and a very God place Inside the will of God I am being still right now.

“This all feels like a set up. They want me to react I flew back from Miami and none of my kids are coming to Sunday Service I am public about this because we are a famous Praying and expressing how I have no rights to my children is the only thing I can legally do.”