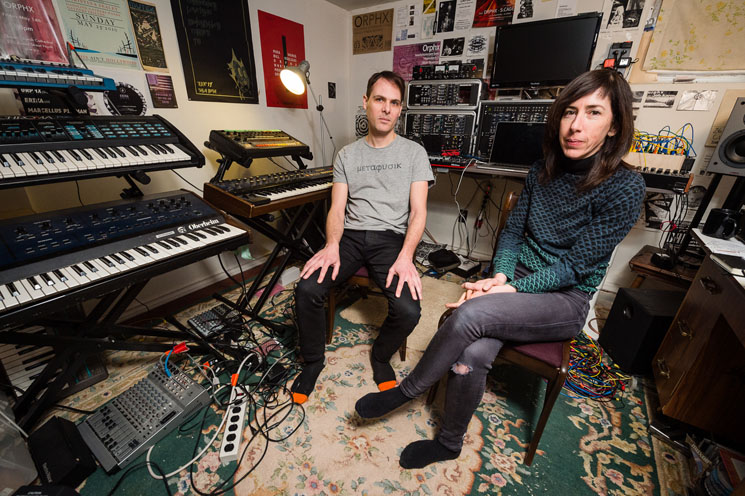 On a quiet residential street in Hamilton, ON, some Canada's best industrial techno is made. Who would've thought?

Orphx duo Christina Sealey and Richard Oddie have been making music together for a quarter-century. Though they are no longer married, they've maintained their musical relationship throughout, using what's now just Sealey's house as their base operations. And though the European club scene regularly draws them out on tour, they've recorded in Hamilton for most 25 years, a fact that seems to permeate through their music.

"It's an interesting place, because you have this industrial backdrop here that starts to become a part the music," Sealey says. "But then, you can go to the Bayfront in ten minutes on a bike, or you can walk to the Bruce Trail in five minutes. So, just that contrast between the core industrial aspects the city, and then these obvious natural formations, has definitely been an influence on our music."

While the Hammer has clearly helped shape the overall sound Orphx, its crumbling factories also played a more direct role in their formative recordings too. In the early '90s, when the pair were still in high school, they used the city's dilapidated warehouses for their own sonic explorations.

"There were two blocks the city taken up by this factory that had shut down," says Sealey. "It was in decay, just overrun by vegetation and debris. So we'd break in, sneak around, record sounds and videos — all sorts things.

"We actually did a performance in there too," Oddie adds. "One night, we went in there with around ten people to do a show. We had already gone in earlier that day and set up pieces metal and oil drums and shit we found around the site that made cool sounds.

"The early tapes actually have sounds from that space that we recorded on a reel-to-reel, and then chopped up," Oddie continues. "The first CD we did in '96 has a lot sounds from there, so it kind made this big archive that we were able to pull from when we wanted to."

Nowadays, the focus is very much on the gear in their cozy basement studio. When it comes to audio equipment, Orphx span the breadth time and functionality. Gathering dust in the corner are old favourites like Ensoniq's ESQ-1 and Mirage synthesizers that, along with a Yamaha, serve as a nostalgic gateway for the pair.

"I had worked on my parents' farm as a kid, and when I got enough money, the first thing I bought was this Yamaha SY55," Sealey notes. "It was recommended by Trent Reznor in Keyboard Magazine. I just remember reading that and being like, 'Oh yeah, this is the synth for me.'"

Sitting in the much ltier keyboard racks, however, are the classic Roland SH-101, a Korg Polysix and some choice items like the Rhodes Chroma Polaris, an Oberheim OB-Xa, a Culture Vulture, and a Roland TR-808 that are all on loan from Junior Boys' Jeremy Greenspan.

You might be able to hear Greenspan's vintage gear on an upcoming Orphx release for Sonic Groove, which they're currently working on — they've also produced a track for Fucked Up's new album, and are looking into projects with Ancient Methods and Ectomorph.

One thing you'll definitely hear, though, is their ever-expanding modular setup, which has become the focus their recordings for the last number years. While Oddie has a st spot for the Korg MS-20 Mini, a semi-modular synth, Sealey has been expanding her Eurorack and FracRak systems for the past ten years. It's now at a point where the back the studio looks like one those old-timey telecommunications rooms, where operators plugged wires in and out different sockets to connect calls. The key difference though is that these wires call you back, so to speak.

"The modular can have a mind its own," says Oddie. "We have more a structure when we're playing live, but the modular does have a chance element to it, and we like that balance organized and improvised."

Never ones to shy away from innovation, Orphx also use their modular setup to manipulate other gear into creating unique sounds. A kick drum from an 808 might be run through the modular's wavefolder to create something more gnarly and textured than you'd get from a conventional distortion pedal, effectively putting their own stamp on traditional sounds.

Yet, for all the synths, keyboards, drum machines, and a seemingly endless string wires, there's one piece equipment in the Orphx studio that's more crucial than all the rest, and it's at the height Swedish engineering: "Have you seen my hydraulic Ikea table?" Sealey asks. "It goes down table descends]. It goes up table ascends]. It's so great 'cause we can practice like we're playing for a gig, standing up, and then when you get tired table goes down], you can make it go down. Aw, yeah. This is the best purchase I've made. Screw all the keyboards. Who cares?"