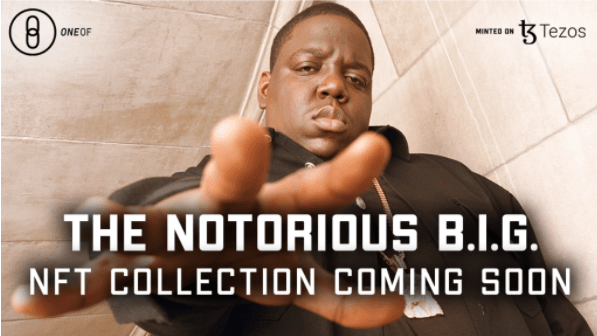 OneOf, the Green Web3 company built for music, sports and lifestyle, is honored to commemorate iconic rapper Biggie Smalls’ legendary hip hop career with exclusive NFTs. As we embark on the auspicious 25th Anniversary of the death of The Notorious B.I.G. and the release of his iconic album Life After Death, OneOf celebrates his life in partnership with The Christopher Wallace Estate, and will be minting the first-ever official The Notorious B.I.G. NFT collection.

A portion of the proceeds of the NFTs will go to The Christopher Wallace Memorial Foundation, Inc. Additional details on the NFT collection will be announced in the coming weeks. Go to https://OneOf.com/Biggie for more information.

“We are excited about our partnership with OneOf and their expertise to memorialize my son Christopher with this first official NFT drop to give his fans an opportunity to participate in and honor their love of him and his music,” said The Notorious B.I.G.’s Mother Voletta Wallace.

“We’re honored to work with The Christopher Wallace Estate to celebrate the incredible legacy of Biggie Smalls,” said Josh James, COO & Co-Founder of OneOf. “Using NFT technology, Biggie’s legacy and his outsized impact on music and culture will be forever cemented on blockchain, to be honored and shared with fans around the world and for generations to come.”

The Notorious B.I.G. NFT collection will be minted by OneOf on the environmentally responsible proof-of-stake blockchain Tezos, preferred by music artists for using up to 2 million times less energy than proof-of-work networks.

The unique concept of the NFT was created by Elliot Osagie of Willingie, Inc and Wayne Barrow, Manager of Voletta Wallace. The Christopher Wallace Estate is represented by Phil Sandhaus of WME Legends.

OneOf, the preferred NFT platform of the music industry backed by Quincy Jones, has recently announced major partnerships with The Recording Academy to celebrate the 64th Annual GRAMMY Awards, Warner Music Group, and the top-rated syndicated morning radio show “The Breakfast Club.” OneOf’s recent Whitney Houston Collection made headlines when a never-before-heard Whitney Houston song made when she was 17 was sold at auction on OneOf for $1 million. OneOf recently expanded into sports and lifestyle with Sports Illustrated legendary athletes series including Muhammad Ali, Shaquille O’Neal, Jerry Rice and more, and iconic teams including Duke Basketball.

OneOf was designed with the next 100MM non-crypto native fans in mind, to create an environmentally sustainable, artist and fan friendly experience. Fans can sign up and purchase their first NFT in under 2 minutes using credit/debit cards or major cryptocurrencies. OneOf donates portions of proceeds from every NFT collection.