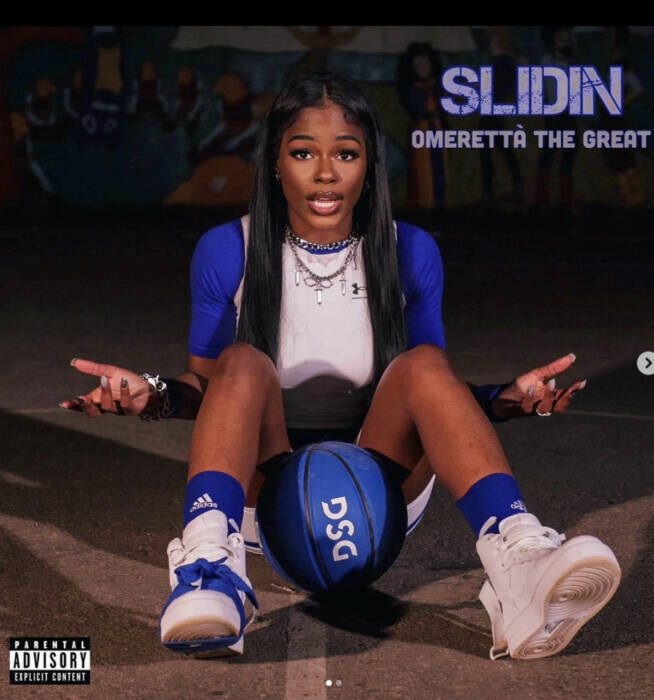 Atlanta rapper and personality Omerettà The Great released a new single and video entitled “SLIDIN (Freestyle)” as the first installment of her freshly launched online freestyle series. Watch the video for “Slidin (Freestyle)” HERE via TSO/Sparta. Listen to “SLIDIN (Freestyle)” HERE.
The lyrical spitfire delivers a flurry of blunt and bulletproof bars back-to-back, mixing creative flows with an energizing trap cadence. The accompanying video showcases Omerettà’s Southern swagger, featuring her stunning style and moves at a local basketball court.
“SLIDIN (Freestyle)” comes on the heels of her hit single “BABA,” which was released in mid-July. “BABA” has garnered over 822k Spotify streams and has received praise from the media. Female Rap Room proclaimed, “With the release of “BABA,” which balances Muhammad Ali-level vocal confidence with trunk-rattling 808s, Omerettà solidifies her position as one of the most promising rappers from the South.”
It just paves the way for more music to come from Omerettà The Great, though, as she rises to the forefront of the culture on her own terms.
Get ready.
Continuing to drum up buzz, her latest single, “Sorry Not Sorry,” has racked up over 5 Million combined streams on the Remix with Latto. It garnered a rave review from Vibe, who wrote that “on the confident track, she declares what is and is not Atlanta as an artist homegrown in the Georgia capital.” Pitchfork lavished the single with praise, claiming “the song’s prideful first verse sets the stage for the bottle of lyrical kerosene she pours in the second, where she calls out several areas—from College Park to Decatur to Roswell—for not truly being Atlanta.”
“Sorry Not Sorry” & “BABA” will be the singles leading into her debut EP via TSO/Sparta.