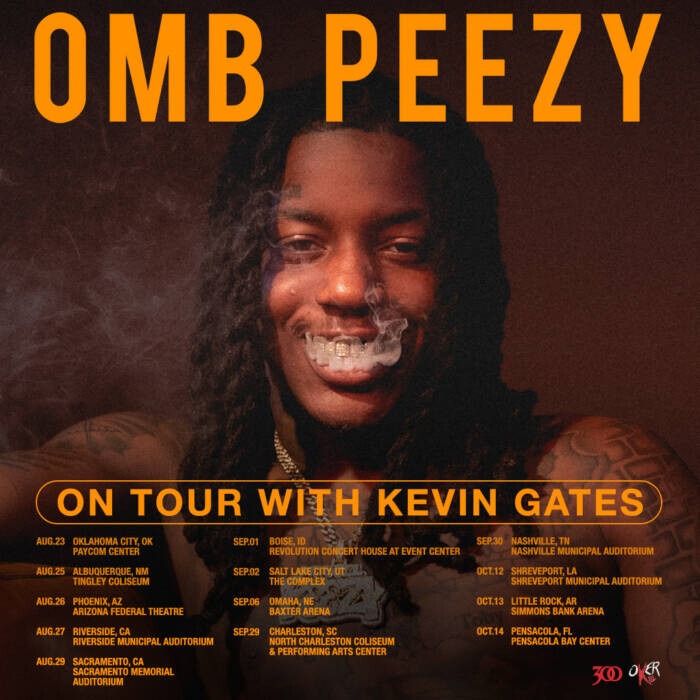 Kicking off a new chapter poised to take him to new heights, lyrical anomaly OMB Peezy will be hitting the road alongside Kevin Gates this season via the ‘Big Lyfe’ tour. The Mobile, Alabama-born rap star is scheduled to take part in the highly anticipated tour for thirteen dates, as it currently stands, making stops nationwide with a kickoff show on August 23, 2022. Today, OMB Peezy adds another dose of momentum with the release of his new music video “100” courtesy of 300 ENT. The music video premiered earlier today and is available to view HERE.

Produced by Murda Beatz [ Drake, Gucci Mane, Travis Scott], “100” delivers pulsating pressure as OMB Peezy dives deep into his journey towards building a successful career. Now a bonafide superstar in the making with his distinctive presence on the mic and off the mic, Peezy continues to showcase the range of his artistry with today’s new music offering as a  grand testament. The official music video pulls back the curtains to the heart-felt street anthem illuminating Peezy in true form as viewers receive a one-on-one look inside his world. No stranger to the camera, OMB Peezy, outside of music, has been praised for giving fans and followers a chance to see his watch-worthy day-to-day via his ‘Hood Essentials With OMB Peezy’ series made available on his YouTube channel.

As reception for his recently released single “Mufasa” with G Herbo continues to rise and a forthcoming project gearing up for release, stay tuned to more on OMB Peezy.