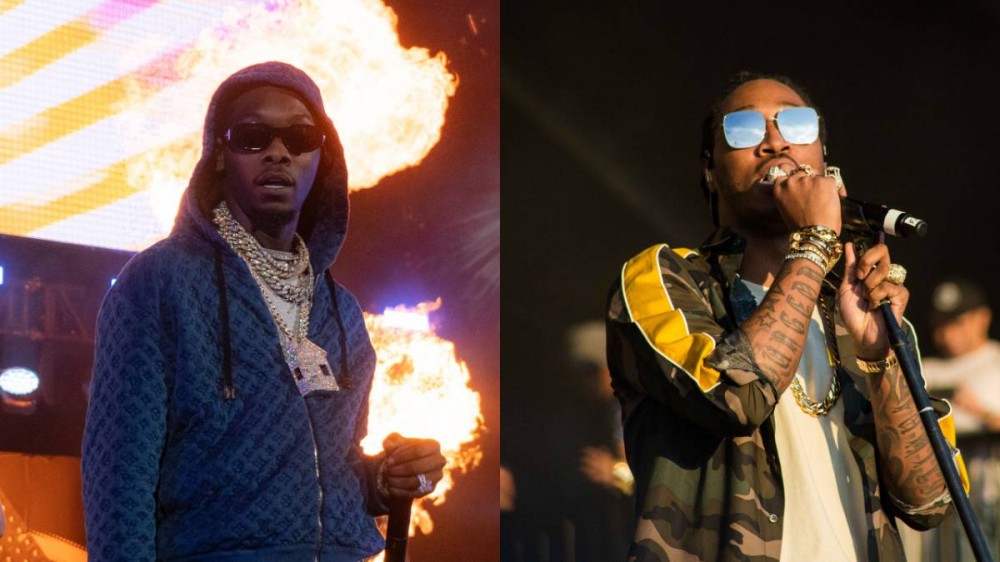 New York, NY – Offset made a surprise appearance during Future‘s rainy Rolling Loud New York set on Sunday night (September 25), which went off without a hitch until it was cut short.

The Father of 4 hitmaker stopped by the Fashion Nova stage at Citi Field in Queens to run through some of his biggest hits including “Ric Flair Drip” and Migos’ “Bad & Boujee” while decked out in all Supreme everything.

The tracks were delivered as rain pummeled the Rolling Loud festival grounds, which eventually led to Future’s set being abruptly cut short due to safety concerns.

Future was midway through his Weeknd-assisted hit “Low Life” when he was told that he would have to wrap things up.

The Freebandz boss took that to mean he had time for one more song, so immediately dove into his signature track “Mask Off,” but Rolling Loud immediately cut his mic and his stage lights before announcing the festival was over.

A$AP Rocky suffered a similar fate during his headlining performance at the festival on Saturday night (September 24) when his microphone was cut off after just 30 minutes.

Pretty Flacko issued a statement on Twitter on Sunday (September 25) apologizing to his fans and expressing his “hurt” over how his set unfolded.

“I also want to acknowledge that even tho I prepared the best show for my fans, detail for detail, over the course of MONTHS… I was unfortunately not able to bring my vision to fruition and Im hurt about that and want to apologize to all of my fans and continued supporters, and thank you y’all for showing up for me regardless!! A$AP4EVA.”

Rocky was meant to hit the stage at 8:55 p.m., but reportedly didn’t show up until roughly half an hour later. He was able to get through nine songs — including unreleased music like “Grim Freestyle,” “Shirt” and the Playboi Carti-assisted “Sights” — while bringing out special guests GloRilla and French Montana.

Future’s Rolling Loud performance was also his first live show since he sold off his publishing catalog for an eight-figure payday last week.

Reports emerged on Tuesday (September 20) that King Pluto sold off a huge chunk of his publishing catalog from 2004 to 2020, comprised of over 612 songs that included hits like “Life Is Good” and “Jumpman” with Drake, “King’s Dead” with Kendrick Lamar and “Selfish” with Rihanna.

The deal ushered in criticism from fans, who accused the Atlanta rapper of selling out. Pluto seemingly replied to this criticism in a cryptic tweet, writing: “Unsuccessful people have no clue how success works.”

As for Offset, he announced last week that he’s planning to drop his new solo project on November 11. The album will serve as the follow-up to his debut solo album Father of 4, which was released in 2019 and debuted at No. 4 on the Billboard 200 chart.