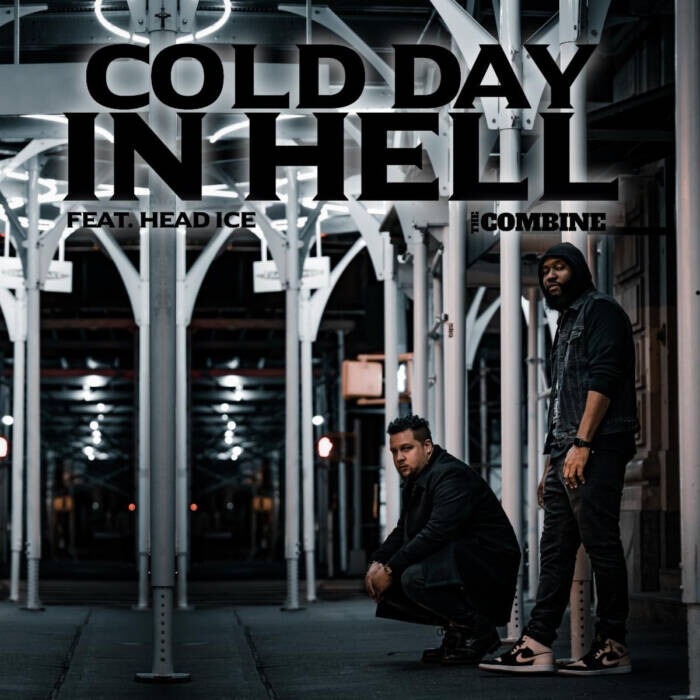 The Combine, composed of lyricist  Triune and vocalist E.Q., on the corner of 144th and Frederick Douglass Boulevard in the heart of New York City, as they join Harlem battle rapper Head Ice in their latest track and video “Cold Day In Hell”. “Cold Day In Hell” joins “Park the Whip” and  “All Good” as another single dropped from their upcoming album ‘Ambition,’ which is set to be the first album that The Combine releases under their new partnership with Viper Records in early 2022.
E.Q. sets the tone delivering the chorus from the block with the shadows of Triune and Head Ice behind him, headlights illuminating the nighttime. Head Ice opens the first verse informing everyone just how prepared they stay — “Beretta spray.” Scenes of him with his associates cut to him and a foreshadowing group of candles. In true East Coast fashion, Triune takes us through a bodega as well as the streets and building steps, expertly executing his lyrics throughout. Director Benny Lee, who also shot the visuals for “All Good,” stunningly displays the streets of New York in a Gotham City style. Triune, E.Q. and Head Ice join the homies sitting on cars as the song comes to a close and the candles from earlier in the video are explained by the message “RIP Michael Martinez Bell.” Styled in a red jacket and sitting on a convertible in the final scene, Bell took part in the shooting of the video but passed away before he was able to witness its full production, forever leaving this a significant project to all involved.
In addition to the sentimental value this video holds to the group, the shooting of this video was also pivotal to uniting The Combine and Viper Records. It was on this trip to New York that Viper Records president Mecca Rashawn met with the pair, and on what Triune describes as a “walk half across the country” back to the hotel that the terms of their partnership began to form. Under this new deal, The Combine is set to release their upcoming album Ambition. An unparalleled combination, they will continue to take the music industry by storm as they showcase their talent in upcoming work.