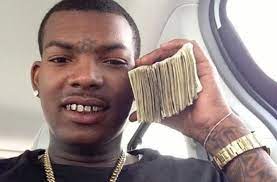 The rapper, whose real name is Fontrell Baines has a song and music video about getting rich after stealing pandemic-related unemployment benefits. In the video, he shows off a stack of envelopes from the California Employment Development Department.

Baines has since admitted to using multiple addresses in Beverly Hills and Koreatown to apply for unemployment benefits he didn’t earn. The 33-year-old rapper agreed to plead guilty to federal mail fraud charges, and unrelated illegal gun possession charges in the coming days.

According to The New York Post, The “EDD” rapper admitted to making 92 false claims using collaborators’ names that totaled $1.2 million through the California Employment Development Department.

He’ll face a maximum of 30 years behind bars on one count of mail fraud and one count of unlawful firearm and ammunition possession when he enters his guilty plea in a Los Angeles court.