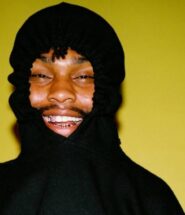 $NOT has been on a roll dropping music videos for his second studio album Beautiful Havoc. He started his run with a visual for “Revenge” in September 2020 and followed up with four more videos before closing out the year.

It seems like $NOT is going full steam ahead in the new year, too. On Wednesday (February 17), the Florida rapper returned with a brand new visual to one of the album’s hardest-hitting tracks “Sangria.” The 23-year-old linked up with fellow Floridian Denzel Curry for the speaker-rattling track, which finds the two artist rapping about their affluent lifestyles and targeting their opps.

For the Omar Jones-directed video, $NOT and Curry headed to Lana River in Tirana, Albania for an all-pink turn-up under an overpass.

“Man, I wish a n-gga pull up on me like a ho (Yeah)/Man, I wish a n-gga, I be posted with my bros (Bros)/Yo, I’m all up in my bag, please step back (Yeah)/This could be a murder case, I pull up with a mask (Uh-huh),” $NOT raps all over the bumping No Fuk and Powers Pleasant-produced beat.