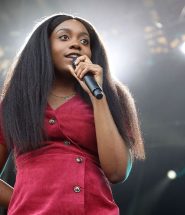 UPDATE (6/22/20, 10:55 a.m. ET): Noname has tweeted that she is "not proud" of responding to J. Cole with "Song 33," writing, "my ego got the best of me. i apologize for any further distraction this caused." She also wrote that she'll be donating her proceeds from the song to "various mutual aid funds." Find her pair of tweets below, then read the original post.

Earlier this week, J. Cole dropped the song "Snow on tha Bluff," which seemed to target Chicago rapper Noname for a tweet in which she called out "y'all favorite top selling rappers" for their silence during a time of mass protests and demonstrations calling for racial justice. In a follow-up tweet thread, Cole clarified that he had respect for Noname, urged his fans to follow her, and said, "I love and honor her as a leader in these times."

But one of Cole's lines in the song remained at the heart of the dispute, especially among fans: "It's something about the queen tone that's bothering me." Noname apparently even tweeted the words "QUEEN TONE!!!!!!" before deleting it. Now, she's responded with a new song called "Song 33." It's only 70 seconds long, but it's packed with wisdom.

Over a Madlib-produced beat, Noname first addresses the patriarchy, then laments the death of Toyin Salau, a 19-year-old Black Lives Matter activist found dead after she tweeted about being sexually assaulted. "Why Toyin body don't embody all the life she wanted?" Noname asks.

From there, the rapper addresses Cole, but not by name, accusing him of recording and releasing "Snow on tha Bluff" as an ego flex instead of devoting his platform to, as she mentions, the killing of George Floyd at the hands of police, as well as recent possible lynchings and the targeting of trans women.

Yo, but little did I know all my reading would be a bother
It's trans women being murdered and this is all he can offer?

Notably, the end of "Song 33" features Noname looking forward, proclaiming that her perspective — as well as her activism, which she mobilizes regularly on social media — is the future. "We democratizing Amazon, we burn down borders," she raps. "This a new vanguard, this a new vanguard / I'm the new vanguard."

Cole tweeted out the link to the song on Thursday night. Noname helpfully tweeted out all the lyrics to "Song 33," so you can follow along with those below as you stream the song above.