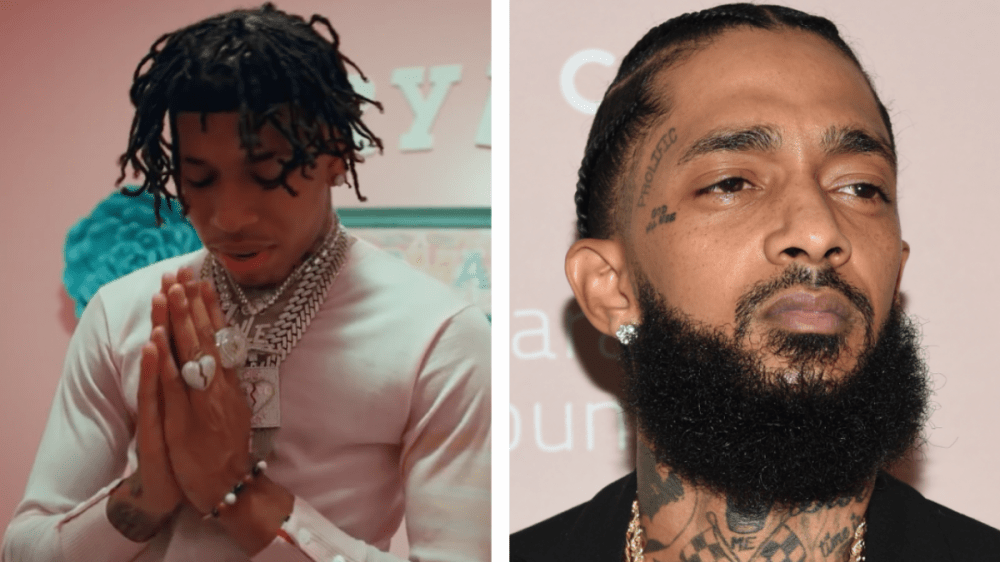 NLE Choppa has paid the ultimate tribute to Nipsey Hussle by getting a tattoo of the late Crenshaw rapper on his body.

The young Memphis native took to Twitter on Friday night (September 10) to share a video of the Nipsey portrait located on his lower leg. The detailed piece shows the side of Nipsey’s face with his “Prolific” and “God Will Rise” tattoos, along with “The World Is Mine” on his neck.

“#LONGLIVEKINGNIP,” he tweeted to his one million followers.

NLE Choppa met Nipsey Hussle prior to his March 2019 passing. In August 2020, he took to social media to share a photo alongside Nipsey with the caption, “Didn’t Meet For A Coincidence. #LLNIP.”

At just 18 years old, NLE Choppa’s body is already covered with tattoos to the point he’s lost count. Notable inks include “Top Shotta” on his stomach, his grandfather, dad, brother and mom on his chest, “Cottonwood” on his arm and Bob Marley/Al Pacino on his torso.

One of the most visible tattoos is “NLE” on his neck. During a GQ interview in 2020, NLE Choppa broke down his tattoos and explained why his neck tattoo was his favorite at the time.

“My favorite tattoo, I guess is probably this one,” he said. “‘Cause I pretty much, like– I just got this one. This my new one. ‘NLE’ stands for No Love Entertainment. It’s my brand, my label. It took like an hour and thirty, probably. Two hours. Because it was mostly shading, instead of just like him drawing it. It was like a shading process.”

He added, “We looked through a lot of fonts before I picked the one. I wanted something bold, something to just stick out. You know, you see it clear. You know, it ain’t no cursive or nothing.”

NLE Choppa’s debut album Top Shotta arrived in August 2020 and debuted at No. 10 on the Billboard 200, with features coming from Lil Baby, Roddy Ricch, Chief Keef and Mulatto. Less than three months later, he dropped his From Dark to Light mixtape.