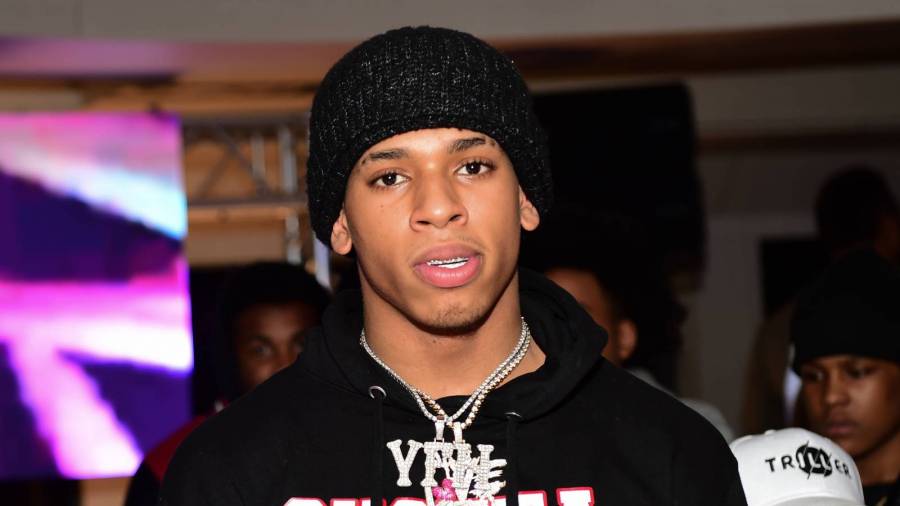 Los Angeles, CA – NLE Choppa is doing some damage control after he was filmed getting into an altercation in Los Angeles over the weekend. In a viral clip circulating on social media, the 18-year-old rapper is strolling down an idyllic boardwalk when it appears he and his friends get into an argument with a man on a bicycle. But soon, the confrontation turns physical and NLE Choppa and his entourage start wailing on the man.

On Monday (May 3), Choppa defended his actions on Twitter and insisted he was trying to mind his own business.

“Damn y’all never got hit in a fight before?” he wrote. “Face with tears of joy bruh asked for picture I said no I’m enjoying myself and I get called scary and a bitch. I make sure I take pictures with every fan but some days I just be trying to chill and get disrespected in the process. And I eat punches ask bout me. Imma rush you take what you got to give and resume beating some. Honestly ain’t wanna fight I was just tryna walk the beach.”

The unidentified woman who initially recorded the incident can be heard in the clip saying, “They are fighting. He’s a famous rapper.” Seconds later, punches start flying and the bystander is heard repeatedly saying, “Oh shit.”

The woman then yells, “That’s not fair!” followed by a request for the men to stop fighting.

NLE Choppa’s actions are a far cry from the peaceful, sentient being he’s portrayed in recent months. In September 2020, he vowed to stop making violent music as he pursued a path to enlightenment.

“Ion Rap Bout Violence Nomo,” NLE tweeted at the time. “If You Hear It From Me It’s A Old Song :100: I Wanna Spread Positivity And Wake People Up. I’ll Still Drop Them For Y’all Tho But Just Know I’m On To Better I’m Tryna grow I Got More To Talk about Now.”

Ion Rap Bout Violence Nomo. If You Hear It From Me It’s A Old Song 💯 I Wanna Spread Positivity And Wake People Up. I’ll Still Drop Them For Y’all Tho But Just Know I’m On To Better I’m Tryna grow I Got More To Talk about Now 💜

Despite NLE Choppa’s new goals, he ran into a little legal trouble in March when he was taken into custody on burglary, drugs and weapons charges and booked into Broward County Jail in Fort Lauderdale, Florida. But he maintains the arrest was nothing but a big conspiracy to take him down.

“To begin when you start changing lives around you and began to stand for something deep in your purpose you become a target to a certain group of people and also the devil,” he tweeted on April 1. “During this arrest I was setup, substances were planted on me that I don’t consume/use/own, my name was lied upon, and I was mistreated in the process.

“Every media outlet, news channel, and etc covered this story to paint a picture on a new surface I’ve been working so hard to create. This case will be beat and I will walk a free man, remember it’s innocent until proven guilty not guilty until proven innocent. Asking my supporters to stand firm with me and allow God to do his work. Thank you and love y’all dearly.”

Shortly after he was released from jail, Choppa dropped a video for the “Beat Box” freestyle, which found him spitting over SpottemGotem’s “Beat Box” single.