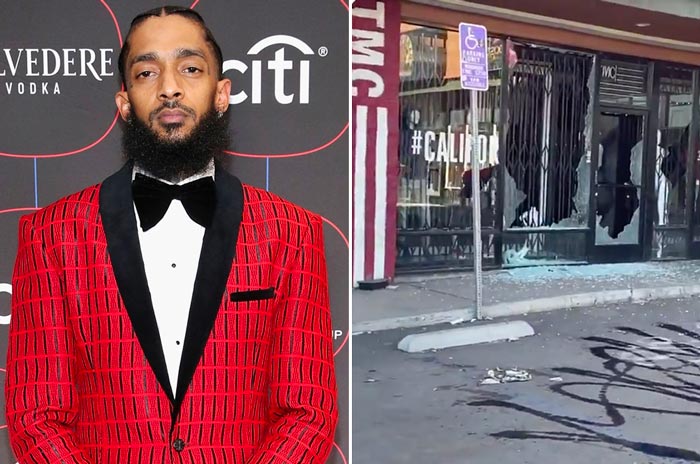 On Tuesday (Nov. 17), footage surfaced on social media showing shattered doors and windows and graffiti outside the store, which is located on Crenshaw Boulevard and Slauson Avenue in Nipsey’s community of South Central L.A. Other stores in the strip mall appeared to have also been vandalized.

Another video shows good samaritans from the community sweeping up the broken glass in the parking lot.

We got it done… pic.twitter.com/B8rbvPFkrb

It’s unclear who was behind the destruction or what the motive was, but there have been reports of increased violence in the area. Last year, the Los Angeles Times reported of a man being fatally stabbed and tourists being robbed.

Fans and local residents took to social media to express their shock and sadness over the destruction, while offering their own theories.

The level of disrespect man. Nip put his blood sweat and tears into his community

Bro the whole area should be protecting that store smh Weak ass dudes ,funny though this happens after they release FDT tees just a week or so ago…. can this year be over already.

No witness despite the fact that it obviously made a lot of noise? Smell like the police did it

A fence was erected around the strip mall last August in preparation for construction on a mixed-use development called Nipsey Hussle Tower that will include a museum. Nipsey opened the Marathon Clothing store in June 2017 and sold merchandise featuring his “Crenshaw” logo in cursive.

The 33-year-old rapper was shot and killed outside the store on March 31, 2019. Nipsey owned the shopping center, which was being investigated for gang activity prior to his death.