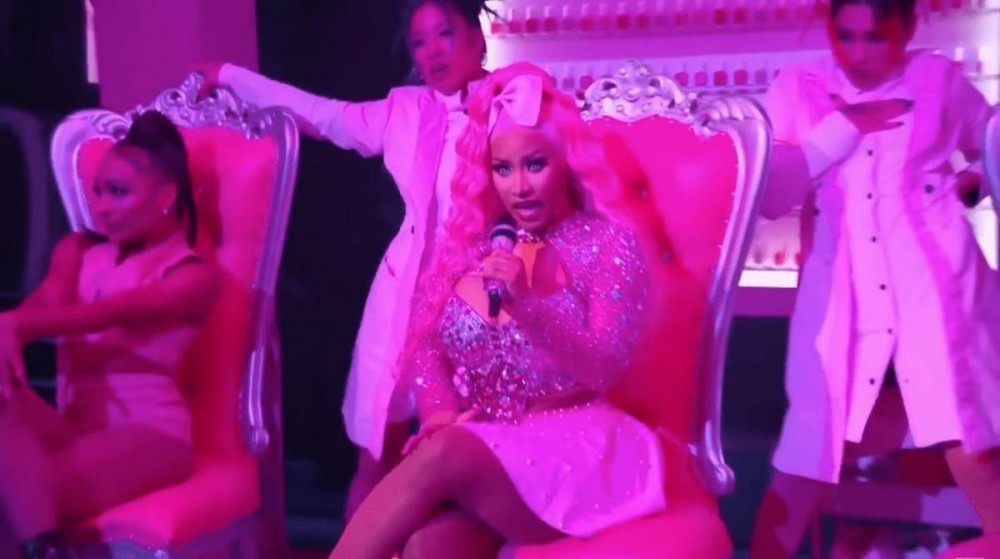 Nicki Minaj‘s acrylic nail that she is said to have worn while performing at the MTV VMA’s has reportedly sold on eBay for quite a high price tag.

eBay user taw1678 began the auction for the unusual memorabilia item on Wednesday (September 7) and reports have claimed the press-on nail has already sold for $55,000, though HipHopDX couldn’t independently verify the existence of the listing.

The item’s description claims that taw1678 came into possession of the nail while he was positioned in the front row of the VMA pit where Nicki performed her much-talked-about medley and that the nail flew off right before her show kicked off.

“I was front row in the pit at the VMAs and Nicki’s acrylic nail fell off moments before she started to perform (her crew quickly glued on a replacement),” the seller wrote. “This nail was WORN by THE QUEEN NICKI!! Our phones were locked up during filming, however, I have included photos taken before and after the show to prove authenticity. Happy to provide any further evidence if desired.”

Nicki Minaj is hardly the first A-list rapper to have some of her memorabilia appear on eBay. In 2015, DMX‘s son auctioned off a platinum plaque commemorating three of his father’s platinum albums. Last July, a fan also found a pair of French Montana‘s much-talked-about “Coke Boy L.A. Ave” sneakers and sold them for less than a dollar on eBay.

There’s also the controversial eBay sale of Wu-Tang Clan’s still-unreleased album Once Upon A Time In Shaolin, which went to disgraced Pharma-Bro Martin Shkreli for $2 million before it was confiscated by the federal government after Shkreli went to prison for fraud. The project was then sold to its current owners for $4 million.

Nicki Minaj’s aforementioned performance at the 2022 MTV VMA’s included a setlist that featured “All Things Go,” “Monster” “Beez In The Trap,” “Chun-Li,” “Moment 4 Life,” “Super Bass” and “Anaconda,” before she closed out with her most recent Billboard smash “Super Freaky Girl.”

The Young Money superstar also received the Michael Jackson Video Vanguard Award earlier in the evening, and in her acceptance speech thanked all of the artists who inspired her creative vision up to this point, including Lil Wayne, Foxy Brown, Lauryn Hill Hill, Slick Rick, Kanye West, Beyoncé, Eminem, Drake, Rihanna and even Britney Spears.

Meanwhile, Quentin Miller recently pointed his finger at Nicki Minaj as the person he thinks is to blame for the beatdown he allegedly received from Meek Mill‘s crew back in 2015.

Speaking on the New Rory & MAL podcast, the rapper and songwriter talked about his role in the infamous Drake-Meek Mill feud and how it led to him getting a busted lip following an altercation at a Los Angeles Nike store.

Miller claimed Meek pressed him at the Nike store in the midst of the beef but decided against doing anything physical after realizing QM wasn’t a street dude. However, Meek was allegedly then instructed to turn around by Nicki Minaj.