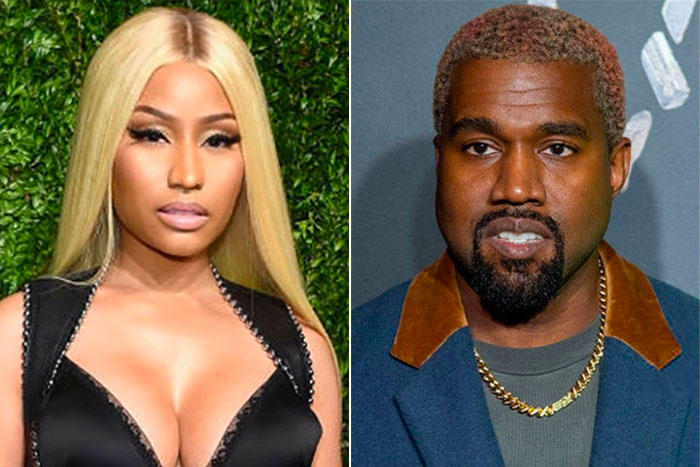 The rap queen popped up on DJ Boof’s Instagram Live on Friday when she was asked by fans about the unreleased song, which also features Ty Dolla $ign. She revealed that she and Kanye shot a video for the long-awaited track, which came as a surprise to many. After her Barbz begged for her to officially release it, she said she would contact Kanye.

However, she admitted that she’s not the biggest fan of the song, which has since leaked. “Not gonna lie, I don’t like this song but they do,” added Nicki, who announced that she will host her own Instagram Live next Friday.

Nicki Minaj is currently on DJ Boof’s live she said she will be doing a Instagram Live and she will hit up Kanye West about releasing “New Body” pic.twitter.com/IWcvMGLT4h

“Not gonna lie, I don’t like this song but they do.” — Nicki Minaj about “New Body” on DJ Boof’s livestream.

“New Body” was originally slated for Kanye’s ill-fated Yandhi album. There were reports of a cleaner version appearing on his gospel album Jesus Is King, but the song didn’t make the cut.

In 2018, Kanye spoke about their collaboration, which is about body shaming. “It’s a Ye concept but I’ma say it to y’all right now. I’m taking two stigmas at once because I love taking stigmas and flipping ’em to a positive–negative energy to a positive,” he told TMZ.

Nicki, who has fielded pregnancy rumors, has remained quiet on social media in recent months. However, she did speak out following the death of George Floyd at the hands of a Minneapolis police officer. “Let your voice be heard. Be angry. White people have been using violence against us since the beginning of time. We didn’t invent violence & looting,” she said.

After earning her first No. 1 on the Billboard Hot 100 as a featured guest on Doja Cat’s “Say So” last month, there are also reports that Nicki will appear on 6ix9ine’s new single, which is set to drop Friday, June 12.