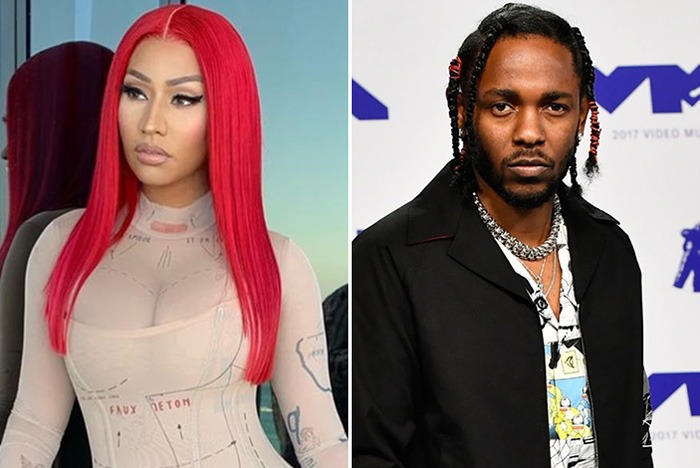 Nicki Minaj fans have been patiently waiting for a Kendrick Lamar collaboration.

Following the release of her new song “Yikes,” Nicki returned with her first Queen Radio episode of the decade on Monday. During the episode, the Queen revealed why she has yet to collaborate with King Kendrick.

“The reason why I haven’t collaborated with Kendrick Lamar yet is because he don’t want to get washed,” joked Nicki.

She went on to express her admiration for the Pulitzer Prize-winning rapper. “I’m a big fan of him and his talent and I’m looking forward to collaborating with him one day hopefully because he’s animated and I like the animation. And also, he just respects the craft of rap and at this time right now…” she laughed before trailing off.

Kendrick has shown Nicki love in the past. On her “Make Love” collaboration with Gucci Mane, she referenced the Compton MC: “Bitch I’m the greatest, no Kendrick and no Sia / I’m the iPhone, you the Nokia.” After hearing the name drop, Kendrick tweeted: “I love it Nicki Minaj,” prompting Nicki to reply, “I knew you would 😜 ha! Thx Kendrick.”

During Monday’s episode of Queen Radio, Nicki also welcomed special guests Karol G, Meghan Trainor, Maliibu Miitch, and 50 Cent, who has been one of her most loyal supporters. “50 Cent is one of the only people who always had my back,” said Nicki.

Southside we outside. One of my inspirations. #QGTM @50cent

See other highlights from the episode below.

.@NICKIMINAJ says she hasn't planned her wedding, but it will be sometime this year. She wants Keke Wyatt to perform — "I'm a last-minute impulsive bitch" #QueenRadio 😂

Nicki's favorite songs from each album…

Nicki: "50 Cent is one of the only people who always had my back" #QueenRadio