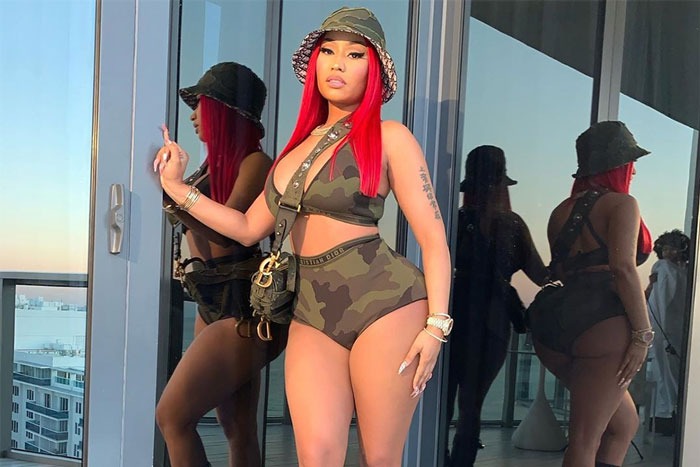 Just days after linking with Meghan Trainor on the latter’s single “Nice to Meet Ya,” Nicki Minaj is previewing a brand new track called “Yikes.” Taking to social media on Monday evening, a red-haired Nicki shared a snippet of her unapologetic verse while seated alongside her husband Kenneth Petty in the studio.

I play tag & you #IT for life. You a 🤡 you do it for likes. #Yikes pic.twitter.com/pI1YZdIFvF

“Yikes” became a trending topic while sparking controversy for its Rosa Parks lyric, which happened to coincide with the civil rights icon’s birthday. Fans took to Twitter to weigh in on Nicki’s bars.

Everyone shocked about Nicki’s Rosa parks line like she’s not the same person that said ” like MJ doctor, they killing me” #YikesNM #Yikes pic.twitter.com/3jam0g8wVM

This the disrespectful Nicki we wanted She back in her bag and ain’t nobody safe #Yikes #Rosaparks pic.twitter.com/yLS7fVXZcK

Rosa Parks when she wakes up to celebrate her bday tomorrow just to find out the real reason she’s trending… #yikes pic.twitter.com/mn1C4Vv5Wz

After a nearly three-month hiatus, Nicki returned to social media last week, sharing a series of new photos in which she dons green and red hair while boo’d up with her husband.

She is readying her highly-anticipated fifth album and has been in the studio with artists including DaBaby and Gunna. “I just recently collaborated with DaBaby, so you know he got to return that favor, and Gunna, I love Gunna,” she told The Shade Room last fall. “So, if there is an album there’s going to be way more than that if there is an album, but those are two new people that I haven’t had on an album yet who I would love to work with them.”

The Queen has more in store for 2020. She will appear on the season 12 premiere of “RuPaul’s Drag Race” on Feb. 28 and will speak at Irving Azoff’s Keynote Conversation at Pollstar Live! 2020 in Los Angeles tonight.