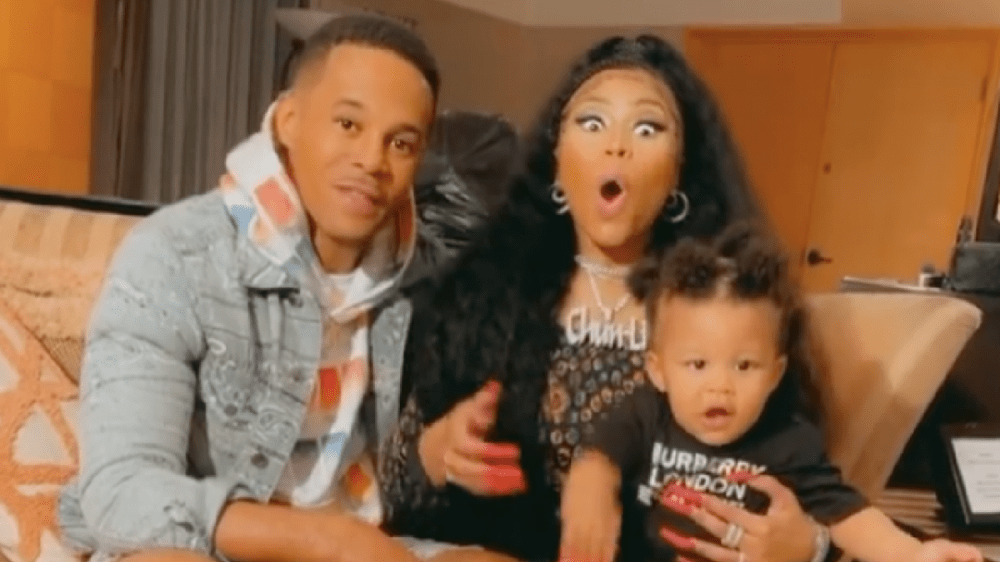 Nicki Minaj is clearly loving being a first-time mother since giving birth to her 11-month-old son, affectionately known as “Papa Bear,” in September 2020. This week, she was lucky enough to capture a special parental moment on camera as her baby boy said his first words.

On Thursday (September 2), Nicki shared a video on Instagram of herself, husband Kenneth “Zoo” Petty and Papa Bear enjoying a cute family moment together. As the trio posed on a couch for the video, the Young Money rapper tried to get her son to interact with the person behind the camera by holding up his arm and encouraging him to “say hi.”

Unexpectedly, Papa Bear (whose real name has yet to be revealed) opened his mouth and let out his best baby impression of “hi.” The adorable moment visibly caught Nicki by surprise as her face lit up and she let out a gasp of amazement.

Nicki Minaj shared more footage of the family moment on Instagram, giving fans a close-up of Papa Bear sat on her lap as well as him having fun in his baby roller. Papa Bear is set to celebrate his first birthday on September 30.

“Omgggggg it’s your husband in the back grabbing you and rubbing you,” she wrote as the caption. “I love this for youuuuuuu.”

The cute family moment comes amidst controversy hovering above Nicki Minaj and Kenneth “Zoo” Petty, however. The couple are currently being sued by the victim of Petty’s 1995 rape case conviction, Jennifer Hough, for intentional infliction of emotional distress, harassment and witness intimidation.

Hough claims Nicki offered to fly her and her entire family to Los Angeles if she recanted her statements about the rape allegations, for which Petty was arrested in March 2020 after failing to register as a sex offender in California. In June, he struck a plea deal to lighten his sentencing.

Nicki Minaj and Kenneth Petty got married in October 2019 after less than a year of dating.