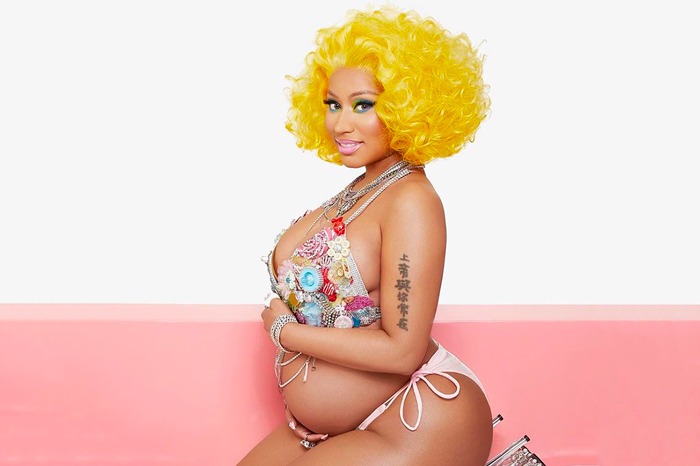 Nicki Minaj is going to be a mom.

After months of rumors, the rap queen has officially announced that she is pregnant with her first child with husband Kenneth Petty. Taking to Instagram on Monday, a pregnant Nicki shared a series of photos from her stunning maternity shoot, photographed by David LaChapelle.

Mrs. Petty can seen crouched on the floor with her pregnant belly on display in one, which she captioned “Preggers.” In another photo, a yellow-haired Nicki lounges in a bikini on a pink couch while caressing her baby bump. A fourth photo depicts her as the Virgin Mary in all white.

Love. Marriage. Baby carriage. Overflowing with excitement & gratitude. Thank you all for the well wishes. 💛

And finally, the Virgin Mary by #DavidLaChapelle 🙏

The excited mom-to-be thanked her legions of fans for their support. “Love. Marriage. Baby carriage. Overflowing with excitement & gratitude. Thank you all for the well wishes,” she wrote.

Nicki appears to be at least six months into her pregnancy. She received well wishes from friends including Halle Berry, Sam Smith, Young M.A, Sevyn Streeter, and more.

Nicki had kept her pregnancy under wraps. She has remained off social media for the most part since February, only to return to promote her chart-topping collaborations with Doja Cat and 6ix9ine.

In May, she hinted that she had a bun in the oven and had been experiencing pregnancy symptoms including “nausea and peeing nonstop.” When a fan asked if she could post a baby bump photo, Nicki responded, “Yea in a couple months. The world ain’t ready yet.”

Minaj, who married Petty in October, has been open about wanting to start a family. “I’m not saying I’m pregnant. That’s the end goal,” she said during an episode of Queen Radio last year. “I think I have what I was striving for, just happiness. It was so hard to get to a happy place. Now that I’m there I don’t want to compromise that for anyone or anything.”

In addition to delivering her first child, Nicki has also been working on her new album. Last month, she hinted that it may be titled Pink Friday 2, a sequel to her 2010 album. “It’s probably the most excited I’ve been about an album release in a really long time,” she told ELLE. “This one incorporates all the things people love about Nicki, but it also just has a way bigger sound.”