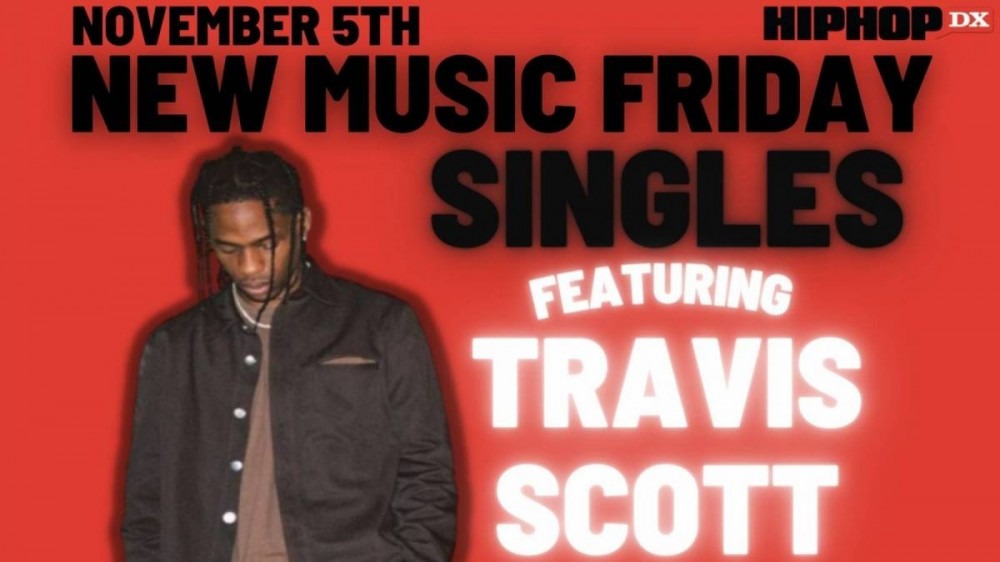 HipHopDX – Just as Travis Scott created his own parallel universe with the rollout of Astrowold, the Cactus Jack captain is manifesting an alternate reality to unveil his upcoming UTOPIA album in this week’s New Music Friday Singles coverage.

In addition to La Flame’s new release, several stars have descended to deliver new singles including Post Malone, who has joined forces with The Weeknd, Bobby Shmurda, NLE Choppa and Polo G and more.

And as if that wasn’t enough, eager listeners can also look forward to offerings from French Montana and Fivio Foreign, SpotemGottem and more.

Here’s the full list of singles released Friday (October 22) below.

On the eve of his annual Astroworld Festival, Travis Scott dropped a bombshell on his fans, revealing he would be releasing the follow-up to his 2020 “Franchise” hit single, unlocking the rollout of his upcoming UTOPIA album.

Being that La Flame is a man of the people, Travis opens the portal to UTOPIA with his “ESCAPE PLANE” and “MAFIA” double single release.

Both Post Malone and The Weeknd have been breaking down major barriers this year, between Posty’s incredible Diamond certifications status with the Recording Academy of America, and the immense streaming success of Abel’s Blinding Lights album on Spotify.

Basking in the glory of their collective glow-up, Post Malone and The Weeknd connect on “One Right Now.”

Bobby Shmurda is taking full advantage of his freedom and retaking his spot as one of New York’s hottest rappers.

Proving he can still create a wave of his own, Bobby makes a “Splash” with his new offering.

NLE Choppa seems to be ready to pull a Kyrie Irving and protest rap over his anti-vaxx beliefs.

Until then, he and Polo G will keep things “Jumping” with their fresh new record.

While still running on the high of his “I Don’t Really Care” visual single, in which he emulates the likes of artists such as Childish Gambino, Biggie Smalls and more, French Montana got popped off on by Lil Durk for his bold claims of jumpstarting the Chicago JAY-Z’s career.

With the rap game in the palm of his hand right now, French gets Fivio Foreign on his side for his perfectly timed “Panicking” single.

SpotemGottem has managed to gracefully bounce back the near readily drive-by shooting incident he was involved in outside of a recording studio in Florida in the wee hours of the morning.

Having found his pace in life again, the “Beatbox” rapper skirts off on the beat with his choppy bars on his latest “SRT” banger.

Silk Sonic – “Smoke Out The Window”

With a Billboard Hot 100 Chart No. 1 already under their belt for their beloved “Leave The Door Open” jam, Silk Sonic have a high ceiling for success going forward.

Unfazed by the pressure, Anderson .Paak and Bruno Mars blow “Smoke Out The Window” on Silk Sonic’s new groove.

Los Angeles-based Warner Records signee IV4 is leaving nothing to the imagination on her sultry new record from her upcoming Get Rich and Cry Trying album.

With the falsetto support of Jeremih backing her silky smooth vocals, IV4 demands you get your “Stroke” game right before approaching her.

When HipHopDX caught up with Mowtown’s rising Gen-Z artist The Hxliday at Rolling Loud music festival in New York last month, the “Wit Dat” rapper revealed he has a lot of new music on the way.

Making good on his word, The Hxliday delivers his fresh and measured “Doses” single.

Watts-bred producer Rappa has quietly conquered the scene around him over the years, producing for top-tier L.A. rappers such as Az Chike, 03 Greedo and more in the process.

Now Rappa is taking his talents up to the Bay Area to connect with San Francisco-based rap upstart Mac Mois on their “Outta Town” banger.

After receiving Jadakiss’ blessing on his “No Hand Outs” anthem, Million Dollar Moe has managed to secure yet another major co-sign from the legendary Hip Hop group The Lox.

Backed up by Styles P, Million Dollar Moe exercises the “Trap Ghost” on his rap-heavy track.