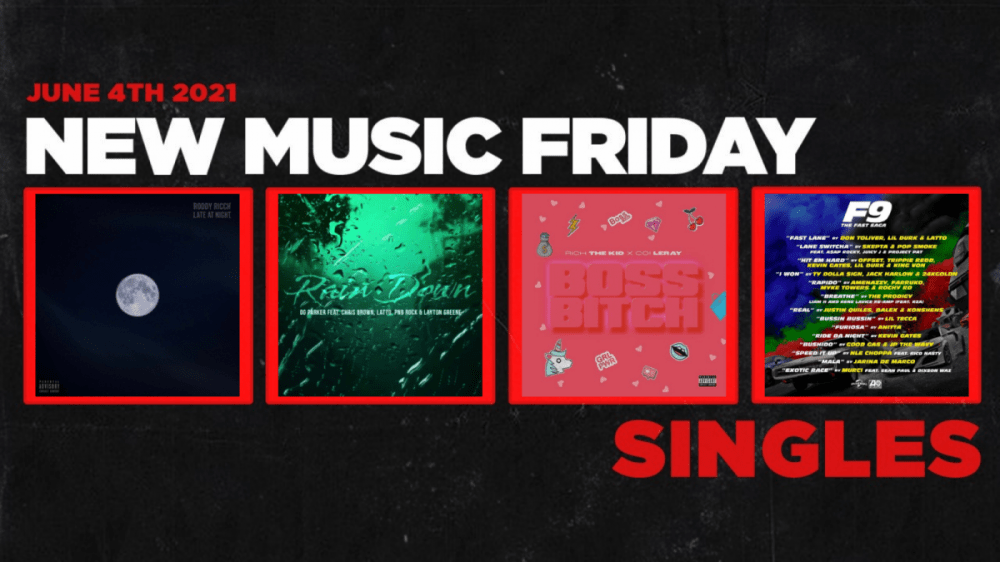 Following our May Best Hip Hop, Rap and R&B songs round-up coverage and before the first week in the month of June is over, HipHopDX has another batch of fresh playlist additions for your listening consideration.

Check out the full list of releases from the week ending Friday (June 4) below.

HipHopDX’s 2020 Rookie Of The Year Roddy Ricch recently sprung into action after assisting 42 Dugg on his “4 Da Gang” banger in April and joining forces with Lil Wayne and Birdman for the trio’s “Stunnaman” record last month. Embracing his new dougie, the Grammy Award-winning rap star makes his return on the Mustard-produced “Late At Night.”

Ty Dolla $ign has seemingly been on the move throughout the entire year, leaving sonic footprints in his blazing trail such as his “By Yourself (Remix)” featuring Bryson Tiller and Jhené Aiko and his contribution to 2021 Rising Star Blxst’s “Chosen” single with Tyga. In his latest headline-making-move, Dolla links up with Jack Harlow and 24KGoldn for his celebratory “I Won” record.

After lacing 2021 Rising Star DDG with his in-demand sauce on their collaborative Die 4 Respect album in March, Migos’ producer OG Parker is back in his bag. For his debut single “Rain Down” single, the Atlanta native has hatched a DJ Khaled-mirroring move by recruiting a star-studded lineup including Chris Brown, Latto and PNB Rock.

It would appear the headlines pinning him as the head of a live-in cult for his Blue Girls Club reality TV show/dating social experiment are taking a toll on “Thotianna” rapper Blueface. Backed by a spiritual feature from OG Bobby Billions, he’s taking a moment to repent and pray for “Outside (Better Days)” on his new street gospel record.

Rich The Kid has been collaborating with almost any and everyone in 2021 and his Lucky 7 album was a major benefactor of his work, boasting fiery guest verses from DaBaby, Quavo, Takeoff, Rubi Rose and others. Rich swoops in with another collab to follow up his “Richard Mille Patek” single with his Coi Leray-leaning “Boss Bitch” heater.

Aggressive rap newcomer Jasiah has already made a bold statement in 2021 following the release of his seven-song War album. Seeking to perfect his plan of attack, the Ohio-bred artist has teamed up with Denzel Curry and Rico Nasty for his surgical “Art Of War” loosey.

Milwaukee’s music scene has a fresh bunch of youthful talent paving the way for the future such as 20-year-old rapper Mace Supreme. For his imaginative “Jumanji” record, Mace has connected with rising Flint MC YN Jay.

Multiple bangers have also landed on this week’s list of Honorable Mentions including Belly’s collaboration with Billboard chart-topper Moneybagg Yo along with Yo Gotti and DaBaby’s club anthem. Also, tune into additional releases from artists such as Thouxanbanfauni, Pressa, Karri, 2KBABY, Bankroll Hayden, and NFM Drama.