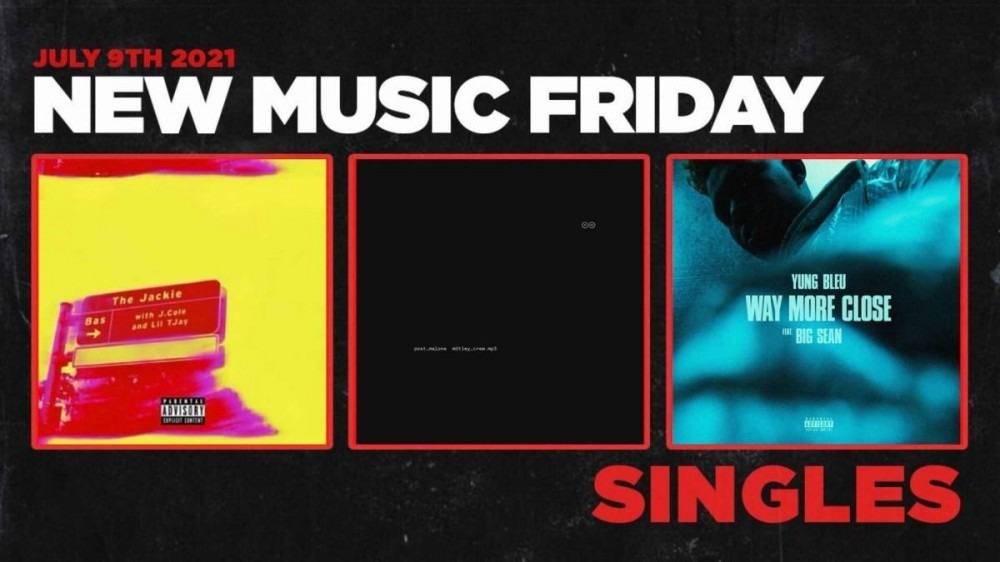 The Billboard Charts are in for a frenzy this week, with a smattering of new singles from some of the biggest artists in Hip Hop and R&B. The competition is set to be fierce on this New Music Friday, so let’s dive in.

Up first is Post Malone with “Motley Crew,” a smooth, radio-ready hit that marks his first single since “I DID IT” featuring DaBaby from DJ Khaled’s KHALED KHALED. This week also brought “The Jackie,” a star-studded collaboration between Bas, J. Cole and Lil Tjay, “Clash” from U.K. rappers Dave and Stormzy and “Nevada” from YoungBoy Never Broke Again.

With fresh singles also coming from Logic, Yung Bleu and Big Sean, Tinashe and more, this edition of New Music Friday is not to be missed.

No summer is complete without a new banger from Post Malone. Luckily, the Dallas-raised mega-star is back with another banger in the form of “Motley Crew.” Accompanying the “Sunflower” rapper’s latest single is a NASCAR-themed music video directed by Lyrical Lemonade’s Cole Bennett.

After a few stellar features on J. Cole’s The Off-Season, Basis now in the driver’s seat on “The Jackie.” Also featuring Dreamville Boss J. Cole and New York crooner Lil Tjay, “The Jackie” is the latest in a slew of new singles released by Bas, making fans hopeful that a follow-up to his 2018 album Milky Way is finally on its way.

Coming fresh from an early verse-of-the-year candidate on Tyler, The Creator’s “WUSYANAME,” YoungBoy Never Broke Again just dropped “Nevada.” Produced by TnTXD and Vadebeatz, YoungBoy’s latest showcases the melodic side of the currently incarcerated artist. After it leaked on TikTok, “Nevada” quickly became one of this summer’s most anticipated release: luckily, the wait is over.

Almost one year ago to the date rapper Logic announced his retirement, stating that his sixth studio album No Pressure would be his last. After a short-lived sabbatical, the “Everyday” rapper is back with new music led by his latest single “Get Up.” Logic’s newest offering comes just a few months before The Bright Future, a memoir written by the GRAMMY-nominated rapper which is set to arrive on September 7.

Yung Bleu is gearing up for his first album since last year’s Love Scars: The 5 Stages Of Emotions. In June the Mobile, Alabama artist dropped “Baddest” with Chris Brown and 2 Chainz — now he’s back with “Way More Close” featuring Detroit’s Big Sean. On “Way More Close,” Blue and Sean deliver melodic verses over passionate, sweeping production from Hitmaka and Chrishan.

Dave and Stormzy have been two of the leaders of U.K. Hip Hop for half a decade, with both artists amassing awards, millions of streams and praise from Drake. “Clash,” brings the two together for four minutes of straight bars over a heavy piano beat. Dave shows love to Jorja Smith and Stormzy flexes the success he’s experience in recent years on “Clash,” a track ripe for U.K. and U.S. audiences alike.

Now that California is officially open and post COVID-19 events are underway, there is more than enough room in the airwaves for a summer hit and Long Beach artist Energy seeks to carve out space for himself with his “Strength” banger. Featuring production from Kaddy, “Strength” takes West Coast music to the next level with light, melodic summer-ready vibes anchored by Energy’s catchy unrelenting flows.

This week’s Honorable Mentions go to Kid Ink and RMR for their new track “Party” and Tupac Shaquille O’Neal for “Flavorz.”