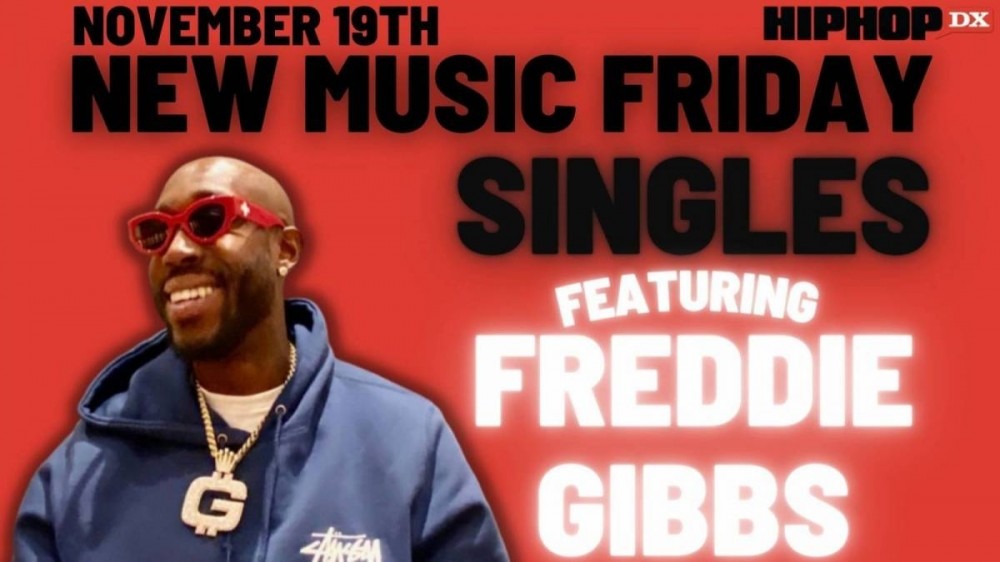 With the Thanksgiving holiday right around the corner, it’s the perfect time to get those playlists right and updated with the freshest slaps to bang during post-turkey day itis-induced jam sessions.

And on cue, HipHopDX returns with another edition of New Music Friday Singles coverage highlighted by high-profile collaborations between Freddie Gibbs and Jadakiss and DX 2021 Rising Star Morray and Benny The Butcher.

Check out the full list of releases from the week ending Friday (November 19), below.

As of late, when Freddie Gibbs isn’t beefing with DJ Akademiks on social media, he’s in the studio, working with artists such as Three 6 Mafia, preparing for his major-label debut album SSS.

Following his “Wartime” loosey, Gangsta Gibbs forms the “Black Illuminati” with the alliance and guest verse assistance of Jadakiss, further fueling the anticipation of his upcoming album.

In the beginning stages of his court-ordered Utah house arrest, NBA YoungBoy appears to be more focused than ever.

Having rolled out the inaugural edition of his Never Broke Again compilation project featuring the young artists he personally scouted, Youngboy turns up for his fans with his “Tweet Bird” single with Rojay MLP, Meechy Baby and P Yungin in tow.

Throughout the entire year, HipHopDX 2021 Rising Star Morray has managed to up the ante on his buzz with each of his major features — highlighted by his contribution on J. Cole’s The Off-Season track “My Life” with 21 Savage.

Taking the reins on his own record, the North Carolina crooner joins forces with lyrical juggernaut to drop off stone-cold hustle motivation vibes via “Never Fail.”

(Streaming embed only, no description).

Even though 10 people associated with EST Gee were arrested by the FBI for alleged drug trafficking and weapons offenses last month, the Louisville rapper is still conducting business as usual.

Seemingly taking a page out of Future’s “Feds Watching” book of raps, EST Gee gets fresh as hell and transforms into “Lamborghini Geeski” on his new offering.

Even as NLE Choppa is on a full-blown spiritual awakening, health and wellness journey, he has managed to remain consistent in his approach of delivering neck-snapping bangers all year-long.

Building on the hype of his recent “Jumpin” single featuring Polo G, NLE Choppa returns to apply pressure on “I.Y.B..”

For those unaware, Rico Nasty is currently in the midst of dealing with the rowdy crowds as an opener for Playboi Carti’s King Vamp Tour, where a zesty Carti fan recently threw a bottle at her while she was on stage performing.

Seemingly unfazed by all the bullshit, she’s recruited 2021 DX Rising Star Flo Milli to let her haters know no matter what, they are still getting “Money.”

There has been a ton of conversation surrounding the possibility of Odd Future alumni Earl Sweatshirt releasing new music this year, which only intensified when The Alchemist ignited rumors of a new album.

And after Vince Staples teased a collaborative album with The Alchemist and the Doris lyricist last September, Earl Sweatshirt responds to growing calls for his presence on “2010.”

Newcomer BaKaRi Bombo comes through with a fiery new track (and even hotter visuals) for his soul-stirring lyrics.

The Cool Kids f. Larry June – “All Or Nothing”

After announcing their forthcoming Before Shit Got Weird album back in June, The Cool Kids gave fans a taste of new music in the form of their umami-infused “Hibachi” record.

Now with the help of Bay Area lyricist Larry June, Sir Michale Rocks and Chuck Inglish start the rollout of the album which is set to arrive in 2022, on “All Or Nothing.”

New York-bred rapper Steph G is preparing to break out as one the freshest faces in the burgeoning drill music scene in the city.

With the co-sign of Brooklyn street rap icon Rowdy Rebel in her back pocket, Steph showcases her in-pocket flows on “RICO.”