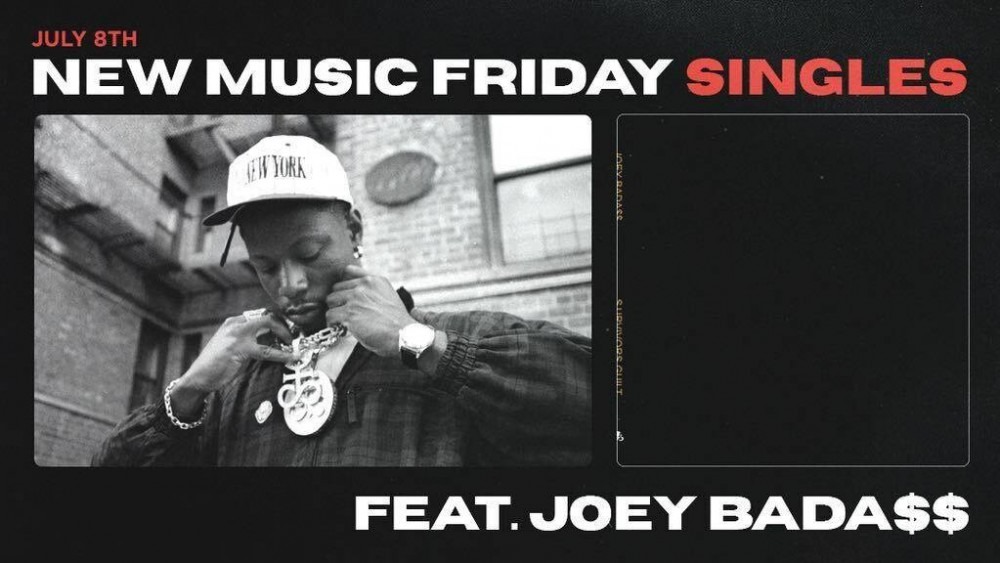 The Fourth of July has now passed, which means we’ve now entered the hot dregs of deep summer. It’s not uncommon to feel morose post-holidays, knowing that so many of the summer months have already passed. If that sounds familiar, look no further: here’s a list of tracks to quickly pull you out of the mid-July blues.

On today’s edition of New Music Friday HipHopDX takes you through the week’s best singles. We start with Brooklyn’s own Joey Bada$$ and “Survivors Guilt,” a dedication to the late Capital Steez. From there we explore TDE’s newest signee Doechii’s “Bitch I’m Nice,” as well as Murda Beatz’s star-studded “NO MÁS” featuring Quavo, Pharrell, J Balvin and Anitta.

Also included this week is the Billboard-ready “Paris To Tokyo” from Fivio Foreign and The Kid Laroi, Tyga’s “Ay Caramba” and a bar-heavy collaboration between Scarface, Freddie Gibbs and Cypress Hill’s DJ Muggs titled “Street Made.”

Keep reading below to catch everything that dropped the week ending Friday (July 8), and let us know your favorite tracks in the comments.

Before the single’s release, the New York City rapper tweeted that his upcoming song “Survivors Guilt” was dedicated to Capital Steez, the Pro Era co-founder who passed away in December of 2012 at the age of nineteen-years-old.

“Survivors Guilt,” which arrives just before his heavily delayed 2000 album, is set over a somber boom-bap beat, a canvas which Joey Bada$$ uses to mourn the loss of his peer and close friend. Battling with guilt and regret for not doing enough, Joey’s latest is a heartbreaking and necessary listen.

Her latest single “Bitch I’m Nice,” is now here, an exuberant and playful track which is ready for hot summer night drives or club escapades.

Murda Beatz has been one of Hip Hop’s leading producers for years now. His booming contemporary take on trap music has soundtracked runs from artists such as Shordie Shordie, Babyface Ray, Nicki Minaj and more. His knack for bringing together all-star rappers isn’t new, but his latest single “NO MÁS” is particularly exceptional, enlisting help from Quavo, Pharrell, J Balvin and Anitta.

Murda’s most recent effort is singular in its intention: create a chart-ready hit by bringing together an unlikely cast of artists. Luckily for the “Do Not Disturb” producer it succeeds gloriously.

Upon an initial glance it seems strange that Brooklyn Drill rapper Fivio Foreign would link-up with Hip Hop-adjacent pop star The Kid Laroi. But thinking about it more, it makes complete sense: Fivio has now fully crossed the line between being a regional rap star and a true sensation.

Sure, the process had begun when Kanye West took him under his wing and gave him some needed attention through DONDA and B.I.B.L.E., but for Fivio to truly stand tall he needs to do so on his own two feet…and maybe with an assist from a beloved artist in Laroi.

Since the passing of Paper Route Empire’s Young Dolph in November of 2021 his younger cousin Key Glock has stepped up to helm the ship. Glock, known for the excellent Yellow Tape and its sequel, skirts across the eerie hum of producer Yung Hurricane’s beat.

It’s become clear that it’s become Glock’s mission to honor his older cousin and rap partner by outworking the competition. He’s channeled the pain into tribute songs like “Proud” and now through the grimy sounds of “Diapers.”

Atlanta rapper JID is Dreamville’s secret weapon. J. Cole may helm the label imprint but it’s JID who has been the most consistent over the past five years. Through phenomenal full-length projects such as The Never Story and DiCaprio 2 he has proven himself as one of the game’s most exciting MCs. Now he’s back with “29 (Freestyle),” an off-the-cuff performance which flaunts his technical rap skills.

Rapping in the unexpected pocket with an off-pace flow, JID delivers just under two and a half minutes of straight bars. Hip Hop heads strap on your helmet.

The DMV is quite possibly the next musical hotbed for the rap industry and artists such as Johnny Rocket and 3OhBlack represent the type of dynamic talent permeating from within the region.

The electric connection of the pair of lyricists is undeniably showcased on their up-tempo bop “Catch Em,” which appeared on Johnny Rocket’s recent High Speed album.

If there is one thing that Twan Green is fully aware of it’s the fact that hindsight is 20/20.

Following the release of his recent “Love Maker” single, the Atlanta native relives a love from a past life via his new offering “Yesterday.”

If you’re still hungry for more, consider checking out “In The UK” by NLE Choppa, Nicholas Craven and Boldy James’ “Death & Taxes” and “Against Me” by Lil Poppa.