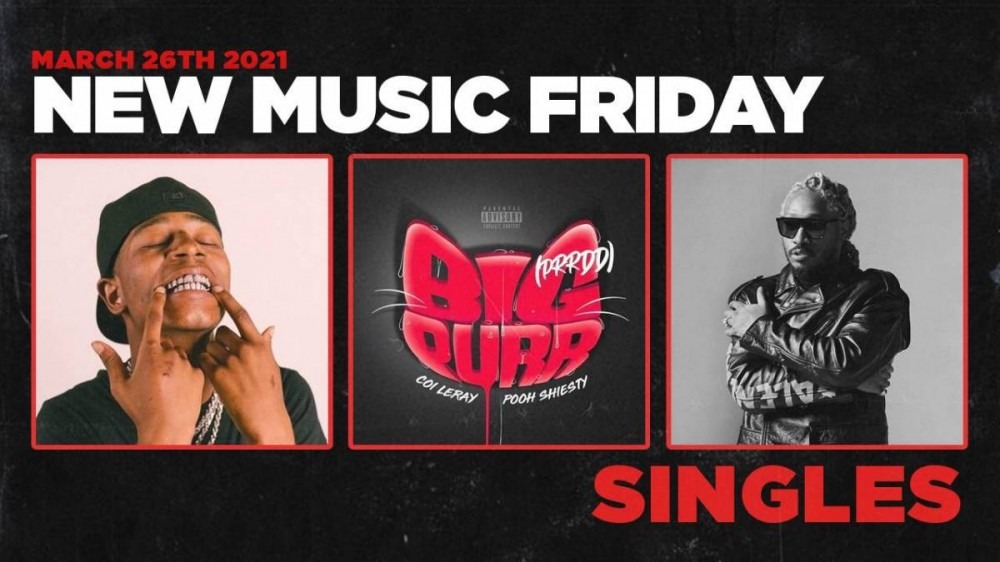 HipHopDX – On the cusp of the opening weekend of the NCAA March Madness basketball tournament, this week’s New Music Friday Singles coverage is packed with back-to-back collaborations.

Gucci Mane’s new 1017 Records roster assembles under the direction of Big Scarr for the third edition of their icy posse-cut while Moneybagg Yo and Future combine for a new trap anthem. Elsewhere, Coi Leray builds on the hype from her Lil Durk-assisted “No More Parties (Remix)” along side Pooh Shiesty and Internet Money grabs Lil Tecca and Lil Mosey for a lil banger.

Peep the rest of HipHopDX’s highlighted list of releases from Friday (March 25), below.

When the first “SoIcyBoyz” arrived via Guwop’s post Jeezy Verzuz battle album Gucci Mane Presents: So Icy Summer, it was immediately evident that Big Scarr, Pooh Shiesy, Foogiano and the Wop himself share an undeniably dope chemistry. The 1017 Records trap quartet reassembles to give their collective hit the trifecta treatment on “SoIcyBoyz 3.”

Moneybagg Yo f. Future — “Hard For The Next”

Memphis rap star Moneybagg Yo last linked with Freebandz Gang boss Future on his Time Served (Deluxe) album track “Federal Fed.” The duo swiftly catches up with each other and trades secretes on how to build with their women on “Hard For Next.”

Coi Leray is currently reaping benefits from multiple popular collaborations to start 2021, such as her viral “No More Parties (Remix)” featuring Lil Durk and Yung Bleu’s recent “Thieves In Atlanta” cut. Adding to her already padded stash of collabs, Coi enlists “Back In Blood” rapper Pooh Shiesty for some raunchy bars on her pussy-popping “Big Purr” single.

Lil Nas X has been teasing his “Montero (Call Me By Your Name)” single ever since his Super Bowl LV ad aired with a snippet of the track, back in February. Following multiple teases of the record on social media, including his fake implants trolling antics on Instagram, the “Rodeo” rapper delivers the full version of “Montero (Call Me By Your Name).”

Internet Money stole the airwaves last year as Gunna, NAV and Don Toliver’s “Lemonade” peaked at No. 4 on the Billboard Hot 100 Chart last October. Hanging on the melodic notes of Lil Tecca and Lil Mosey’s fast-paced rhymes, the collective presses on with the drippy radio-ready “Jetski” single.

Pacman da Gunman appears to be taking the words of his mentor, late L.A. rap fixture Nipsey Hussle, to heart. After releasing his collaborative Lord Knows album with Yhung T.O. earlier this year, the All Money In rapper maintains “The Marathon Continues” mantra with Mozzy and gets a spiritual boost from Nip’s posthumous verse on “Zero Tolerance.”

King Combs is proving his connections are strong on his latest love-lorn single “Holdin Me Down.” In addition to Future’s presence, a strong appearance from 808Mafia energizes the track, as Southside, TM88 and DY contribute to the smooth production.

Honorable Mention’s include new offerings from Swavay, Brockhampton and Danny Brown, in addition to releases from Lil Pump and Ric Wilson.