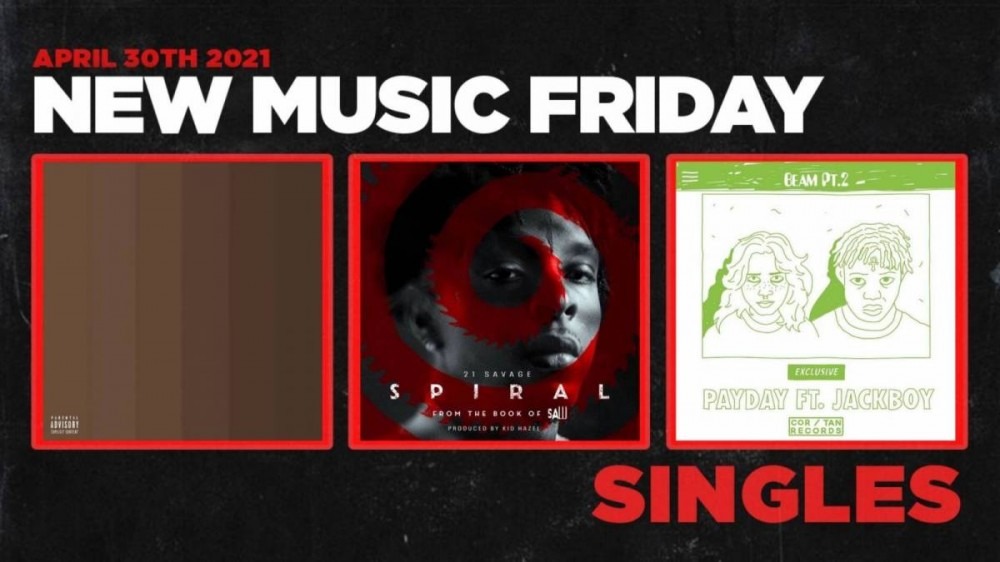 It’s the final day of April, and summer finally is upon us. Temperatures are balmy on the East Coast and Los Angeles is showing more and more signs of life. Mask mandates are easing across the country, and while it’s clear we’re not yet out of the woods, progress is being made.

What better time for a slew of brand new singles? This week’s New Music Friday coverage starts with “Durag Activity” from Baby Keem and Travis Scott, before we walk you through fresh tracks from 21 Savage and Melvoni.

Burna Boy also blessed fans with “Kilometre,” his second single of the year, while Melvoni dropped “Still Approved.” The new tunes don’t stop there, so continue reading for our complete round-up of singles on this New Music Friday.

In 2019, the L.A.-based rapper dropped DIE FOR MY BITCH featuring his mega-hit “ORANGE SODA.” The younger cousin of Kendrick Lamar, Keem exploded onto the scene and quickly ascended rap’s hierarchy. With “Durag Activity,” Keem’s most recent release, the young rapper has landed his most notable collaboration yet in Travis Scott. The “HONEST” rapper hasn’t released a full-length project since that 2019 mixtape, but he’s been teasing fans with a stream of new singles over the past two years so more music is expected from one of rap’s most promising rookies.

The Kid LAROI f. Miley Cyrus – “WITHOUT YOU (Remix)”

Burna Boy transcends boundaries and borders. His music, an organic blend of Afrobeats, Dancehall and Hip Hop has led Burna Boy to global stardom through phenomenal albums such as African Giant and Twice As Tall. “Kilometre,” the Nigerian singer’s newest single, is a lively amalgam of tin drums and muted bass sounds, but as always, it’s Burna’s voice propelling the track to excellence.

21 Savage – “Spiral: From The Book Of Saw Soundtrack”

After a short break following SAVAGE MODE II and the album’s CHOPPED NOT SLOPPED edition, Atlanta’s 21 Savage is back with his latest single “Sprial,” a new rendition of the classic theme music for the Saw movie franchise. 21 has quietly been one of the most consistent rappers of his generation: his discography only grows stronger and he becomes more beloved in Hip Hop with each passing year.

Aside from a feature on Elijah James’ Anomaly, “Ramen & OJ” is Joyner Lucas’ only offering of the year. Lucas tapped Lil Baby for the track, marking the two artists’ first collaboration. Baby is coming off his flaming-hot verse on “Wants and Needs,” while “Ramen & OJ” comes after a prolific 2020 for Lucas, releasing both ADHD and Evolution.

Jackboy certainly exhibits certain similarities to his mentor Kodak Black, but over the past few years, through projects such as Love Me While I’m Here and tracks including his latest, “Protecting My Energy,” the Florida rapper has matured into a fully-fledged artist. Jackboy feels the external pressures of stardom creeping into his bones, but on “Protecting My Energy,” the “Pressure” rapper stresses the importance of self-reliance and inner strength.

Don’t forget to check out this week’s Honorable Mentions, including new music from 3xBravo and Slimelife Shawty and “My Baby” by Lil Skies and Zhavia Ward.