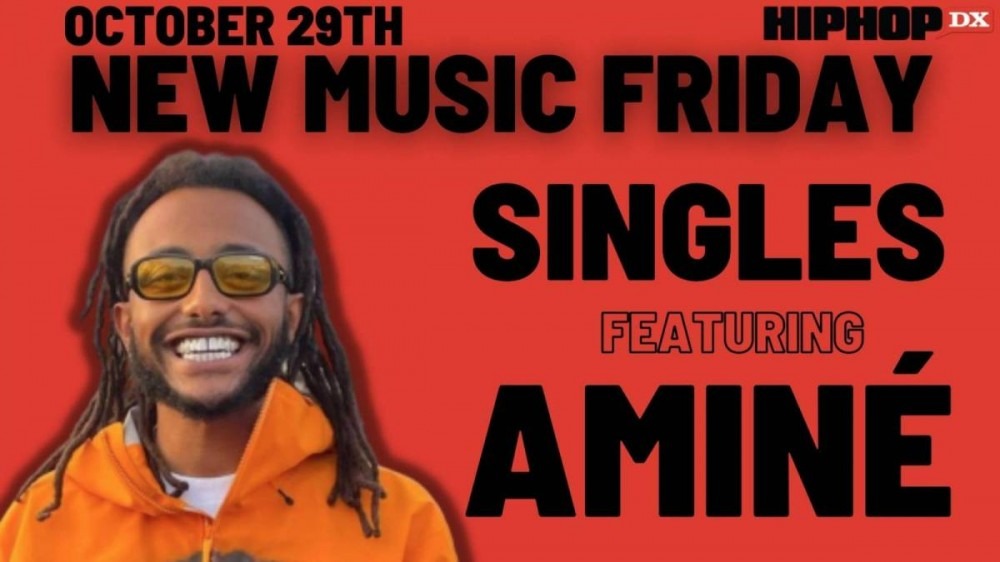 If there’s one thing you can rely on each Friday, it’s HipHopDX sharing the best singles from Hip Hop and R&B each week.

This spooky edition of New Music Friday begins with “Charmander” from Portland rapper Aminé before ducking down south to check out Flo Milli’s “Ice Baby.”

Also included this week are Lil Uzi Vert with “Demon High,” Internet Money affiliate Dro Kenji for his latest single “VANISH,” “Sign Language” by YG and the smooth sounds of “6 MONTHS” by BJ The Chicago Kid.

Dress up into a costume and dive into this week’s roundup of everything you need to hear which dropped on the week ending on Friday (October 29), below.

Aminé’s latest album Limbo sent him into new heights. The project’s melodic and bubbling vibes perfectly built on the momentum the Portland rapper first gained with tracks such as “Caroline” and “REEL IT IN.” The Good For You rapper’s most recent offering boasts a catchy looped sample and Aminé’s contagious bars.

As the weather continues to cool, it appears Aminé’s mind is still set on the warm sun of the tropics, giving “Charmander” a playful, uplifting sound, a perfect remedy for seasonal depression.

HipHopDX 2021 Rising Star Flo Milli is in the midst of a landmark year. She’s already nabbed hits in the form of GoldLink’s “Raindrops,” “Roaring 20s” and “Nasty” by Rich The Kid. The Mobile, Alabama rapper has now come forth with her latest release, “Ice Baby,” shortly after releasing the track’s live version with COLORS.

If you weren’t lucky enough to catch her explosive performance at Rolling Loud NYC yesterday, be sure to stream “Ice Baby” for your daily fill of hard bars.

South Carolina’s Dro Kenji has had a prolific 2021. He’s released two albums—F*CK YOUR FEELINGS and EAT YOUR HEARt OUT—and it seems he’s just getting started. “VANISH,” Kenji’s latest single, brings together his knack for rage-fueled melodic raps and the digital sounds of Internet Money.

The perfect follow-up to his releases from earlier this year, “VANISH” is a perfect entry point to the world of Dro Kenji.

Nobody can touch Bobby Shmurda. Since being released from prison earlier this year, the NYC rapper is taking his time and not rushing a thing. He’s reaping the benefits of his freedom and all the earthy spoils which come with it.

Since being released, Shmurda’s dropped one other solo track in the form of “No Time For Sleep (Freestyle),” but perhaps the release of “Cartier Lens” is foreshadowing a more substantial forthcoming project.

With “Insane,” New Jersey rapper Chris Patrick is welcoming the listener into the chaotic and frantic lair of his own mind. Short, but not so sweet, “Insane” is the latest in a slew of singles and features unveiled by the rapper with two first names, alongside tracks such as “Gang Activity,” Paris Price’s “Killing Me Slowly” and Backpack Ben’s “Bag.”

Rapping with a rapid-fire flow, Patrick’s latest is the perfect soundtrack to this weekend’s haunted festivities.

Emerging from the gritty, world-renowned streets of Atlanta’s Zone 6, 4L Gang G5iVE is ready to take part in the family business as he follows in the footsteps of trap music innovators Yung Nudy and 21 Savage.

Equipped with a major production co-sign from 808 Mafia, 4L Gang g5iVE makes sure his artist debut is “Intentional” on his inaugural release.

There’s nothing better to end the week with than the relaxing sounds of R&B singer BJ The Chicago Kid. Nearly a decade into the music game, BJ’s melodies still sound as fresh as they did on tracks such as 2012’s “Good Luv’n” and 2014’s “It’s True” featuring ScHoolboy Q.

“6 MONTHS,” his latest track, finds the Midwest singer struggling to maintain a relationship and grappling with the pain which arises when two lovers begin to drift apart. Even if the song’s themes are melancholic, “6 MONTHS” is still a comforting listen.

This week’s Honorable Mentions consist of “All Them Days” from Derez De’Shon and Morray, Wiley from Atlanta and Tom The Mail Man’s “ALIEN GIRL” and “TBA” from SSGKobe.