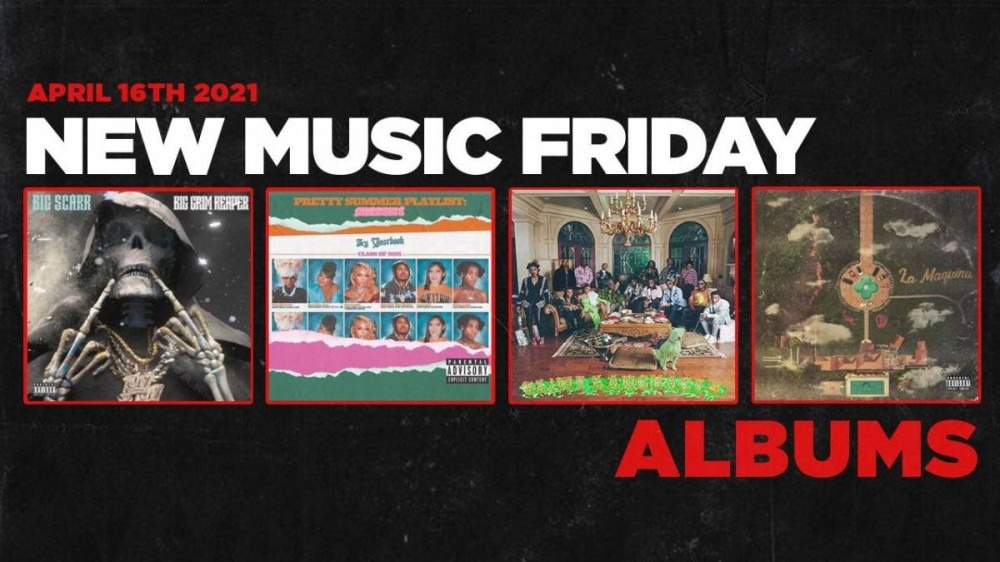 Each New Music Friday drop gets more exciting, as the possibility of a semi-normal summer becomes more of a reality with the announcement of returning live music events such as the upcoming Rolling Loud Miami music festival in late June.

This week’s edition of HipHopDX’s New Music Friday Albums coverage is loaded with summertime ready releases from artists such as Saweetie and Young Thug, with his deep Young Stoner Life roster in tow. There is also plenty of heat in various forms, including Conway The Machine’s latest lyrical masterpiece, an aggressive trap epic from Gucci Mane’s 1017 artist Big Scarr and a new offering from rising Atlanta artist Kenny Mason.

Browse the rest of DX’s top releases from the week ending Friday (April 16) below.

Back in January, Young Thug’s YSL roster mobilized under the direction of Yak Gotti, Sheck Wes and Yung Kayo following the release if their intoxicating “GFU” banger. And with the added hype of the Meek Mill-assisted “That Go” single, big slime boss Young Thug made YSL’s Slime Language 2 album campaign official on Wednesday when he posted the majestic large family portrait of the label, which doubles as the the cover art, on the Gram.

Be sure to have snacks and beverages close by when setting out to listen to the massive 23-track Slime Language 2 project, which is home to countless fire guest features from artists such as Lil Baby, Kid Cudi, Lil Uzi Vert, Skepta and more.

Following the major co-sign Saweetie received earlier this month when pop star Gwen Stefani tapped the Warner Records rapper for her “Slow Clap” single, the Icy girl is giving her stamp of approval on a select group of artists. Pretty Summer Playlist Season 1 is Saweetie’s barometer for forecasting talent she views as “Next Up” according to her Instagram post.

Artists such as Drakeo The Ruler, BbyAfrica and Kendra Jae, among others, join Saweetie on six of the seven tracks existing on Pretty Summer Playlist Season 1.

In 2020, Conway The Machine dominated and delivered arguably one of his best lyrical performances of his career with his hallmark From King To A God album. The Griselda MC almost immediately followed with yet another formidable effort, embedded in his dynamic 10-track If It Bleeds It Can Be Killed project at the top of 2021.

Conway The Machine already gave fans a taste of what his upcoming work of art La Maquina sounds like with the release of his  Cardiak-produced single “Blood Roses” at the beginning of the month. Griselda junkies can now dive into the full album, which includes features from Benny The Butcher, Westside Gunn, 2 Chainz, Ludacris and J.I.D. and production from Alchemist, Daringer, Murda Beatz and Don Cannon.

Gucci Mane’s New 1017 Records roster has been going crazy and fiercely representing the brand for Wop between the successes of rappers Pooh Shiesty, Foogiano and Big Scarr himself. Proof of the 1017’s increasing street popularity lies within the lead single to Big Scarr’s Big Grim Reaper album “SoIcyBoyz 3” — which has racked up over a million streams on Spotify since it dropped late last month.

Outside of appearances from Tay Keith and Baby K, Big Scarr’s Big Grim Reaper album is a family affair and includes features from Gucci Mane, Pooh Shiesty and Foogiano.

Atlanta-based rapper Nebu Kinzia has been hard at work, honing his craft as a producer and songwriter since he release his From Me 2 U album in 2018. He’s poised to make his return after inking a deal with RCA on his restorative Back2Lyfe EP. Of the seven tracks Nebu Kinzia strung together for the EP, he produced five of them.

Kenny Mason dropped off the first part of his Angelic Hoodrat: Supercut in 2020 with his featureless 14-track Angelic album. Since then, the Atlanta rap talent has remained consistent and delivered back-to-back singles and visuals for anthemic tracks such as “Rih” and his distorted “Pup” record.

Though he keeps the features sparse on Angelic Hoodrat: Supercut, Kenny Mason does recruit help from Freddie Gibbs and Denzel Curry, and others, to spice up his 12-track project.

Honorable Mentions this week include a compilation album from Zaytoven featuring Bay Area rappers Prezi, Lil Bean and Lil Yee, among others.