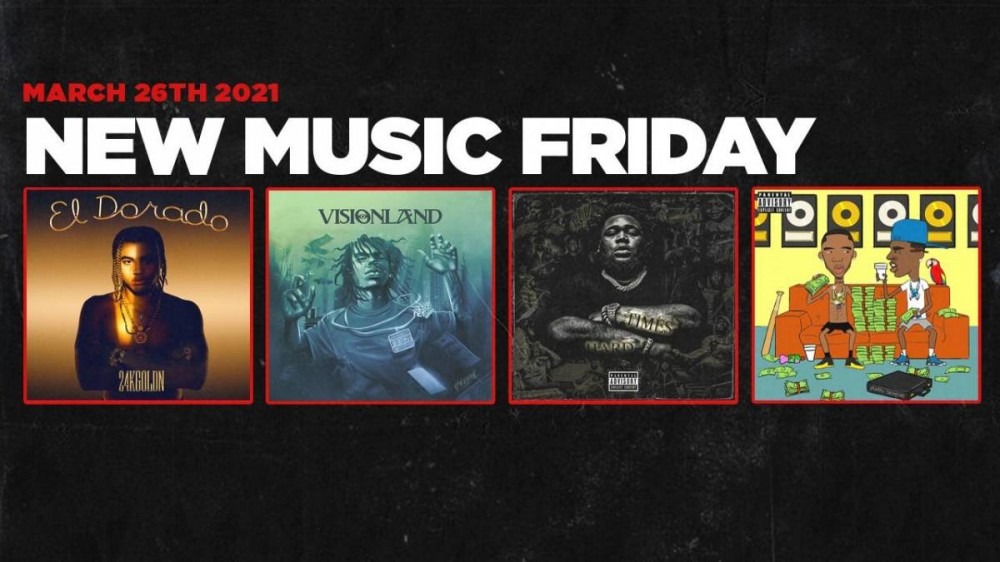 It’s Friday: you know the drill. Each week we’re simplifying your life and making a comprehensive  running through the best albums to drop in the week ending on Friday, March 26th. To start it off, Alamo Records’ Rod Wave is back with Soulfly, a follow-up to last year’s massively succesful Pray 4 Love. Radio favorite 24kGoldn just dropped El Dorado, marking his first full length album since 2019.

Meanwhile, YBN Nahmir dropped Visionland and Memphis cousins Young Dolph and Key Glock are back with Dummer And Dummer 2, the sequel to their 2019 collaboration. The Alchemist continued his run of stellar collaborations with rap duo Armand Hammer (Billy Woods and Elucid) on “Haram.”

It was also a strong week from burgeoning artists, with Chicago’s D2X releasing The Color Blue and Derek King dropping Pressure. Keep reading for all of the best New Albums from this week.

It seems like ages ago when YBN Nahmir started a viral frenzy  in 2017 when he dropped “Rubbin Off The Paint.” He’s been steadily dropping singles and feature verses and was a leading voice on 2018’s YBN compilation project, YBN: The Mixtape, but Visionland is the Alabama’s artist first full length album. On Visionland, YBN Nahmir has grown into his own voice as a rapper, drilling bars with more authority than on much of his previous releases. Nahmir also managed to land features from his Bay Area idols E-40 and Too $hort for “Ca$hland,” not to mention an all-star cast of artists he rallied such as Ty Dolla $ign, 21 Savage, G Herbo and many more.

Rod Wave has made a massive impact on Hip Hop since he explosively entered the scene with PTSD and Ghetto Gospel from 2019. Last year’s Pray 4 Love certified him as a true superstar in the genre, charting at no. two on the Billboard 200 and subsequently earning a platinum certification. Despite the pressure of enormous expectations, Soulfly is another monumental addition to the 22-year-old rapper’s resumé. Wave displays his heart on his sleeve as he delivers passionate ballads over orchestral production from the likes of TnTXD, Eighty8, Dmac and more. In addition to “Tombstone,” the standout single, highlights include “Gone ‘Till November” and “Richer” featuring Polo G.

24kGoldn’s ascent to stardom was sudden and unexpected. As “Mood,” his collaborative track with iann dior inches closer to one billion streams on Spotify, the 20-year-old has unleased the follow-up album to his 2019 project DROPPED OUTTA COLLEGE with El Dorado. On El Dorado, 24kGoldn is focused and intentional, inserting massive pop ballads over grandiose production. “Company” with Future places the two rappers over airy production from Nick Mira, Blake Slatkin and Omer, setting the perfect tone for summer.

Label him a pop star, rock star, rap star, or industry plant; 24kGoldn has become the golden standard with a dominating presence on streaming services, YouTube and radios across the country.

Young Dolph and Key Glock have come together for plenty of music, from boatloads of singles to the first Dum And Dummer album. The duo has come together yet again for Dum And Dummer 2. Both artists are coming off impressive years, with Dolph’s Rich Slave hitting no. five on the Billboard 200 and Glock dropping the stellar Yellow Tape. The cousins are back in peak form on their latest project as they continue to flood the streets with Memphis-rooted sounds. Aggressive keys, textured 808s and an unbridled onslaught of dueling raps make Dum And Dummer 2 a thrilling listen.

Fresh off a Best Rap Album Grammy nomination for Alfredo with Freddie Gibbs, The Alchemist just won’t let up: the L.A. producer teamed up with New York Hip Hop duo Armand Hammer for Haram, his latest in a series of excellent releases. When The Alchemist produces music, you can expect an incredibly high-caliber quality. He has a knack for using samples in a brilliant and unexpected ways and pushing artists into bold places outside of their typical comfort zones, and Haram is no different.

billy woods and Euclid have been making music under the moniker Armand Hammer since 2013’s Race Music and they’ve come a long way. Their severe delivery and acrobatic wordplay have always set them apart, but on Haram they’ve reached an elite space within Hip Hop.

Seattle-born singer UMI has finally delivered her long-awaited debut album in the form of Introspection Reimagined, an eight-song magnum opus from the powerhouse vocalist. Through the 27-minute journey, Umi takes the listener on an adventure through a rich and dense sonic landscape of R&B. UMI uses the diverse instrumentation sparingly on Introspection Reimagined, building momentum into a passionate crescendo while keeping her voice in the forefront with masterful control.

Vic Mensa has always followed a different path than his Chicago contemporaries. He’s strayed away from the city’s popular Drill music, opting for a more unguarded approach, packed with substantive lyrics. The “Liquor Locker” rapper starts I Tape strong with “VICTORY,” produced by Just Blaze and SC before pivoting to the more introspective and vulnerable “MILLIONAIRES” featuring Tish. Also included on the album is TDE’s Zacari, Jeremih, Chance The Rapper and more.

Clouds, the latest mixtape from Michigan-born rapper NF has arrived. The 29-year-old “Let You Down” rapper is known for his vivid, detailed lyrics and his melody-forward delivery. On ‘Clouds,’ NF (born Nathan Feuerstein), lays down a tasting platter of a diverse range of sounds. With “LOST,” NF takes notes from Eminem with playful verses and a dramatic hook. “DRIFTING” balances soft, spoken verses and choppy, chant-like bars with building tension. But perhaps no song is better than the title track which sends the listener through NF’s rabbit hole with an aspirational velocity.

Chicago rapper D2X has started to pop up on the radars of Hip Hop fans across the country. D2X has been dropping singles since 2017’s “Surviving in Amerikkka” and the MC received some due attention with his debut mixtape Enjoy Life from 2018. But now The Color Blue has arrived, marking the rapper’s debut full-length album. Excellent production and thoughtful, clean bars make The Color Blue D2X’s best offering to date. Reflecting on his come-up and newfound success, D2X is genuine and emotive, weaving his personal narrative on rich beats from the likes of Yippie The Producer, GLOhan Beats and more. “Adult Swim” featuring Ro Marsalis is one of our favorite new tracks of the week.

Derek King keeps the listener guessing on Pressure as he weaves together the genres of Hip Hop and R&B into a seamless and unique style. Since More Vibes, King’s debut album from 2019, the artist has been incredibly busy, dropping a handful of singles alongside two full-length albums. On his 2020 releases, King is still searching for his voice, but on Pressure, the singer has emerged as a more confident and fully-developed artist. King was also able to wrangle together a strong list of collaborators, resulting in strong features from P-Lo, Kalan.FrFr and Jackboy.