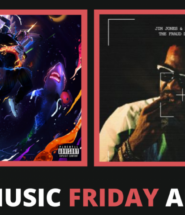 HipHopDX – For music fans yearning for variety, the third week in Black History Month is incredibly diverse and overflowing with a myriad of dense releases to dive into.

Considering Trippie Redd already earned the No. 2 spot on the Billboard 200 Chart with his behemoth Pegasus album last year, the genre code switching he is attempting on his Travis Barker-executive-produced album Pegasus: Neon Shark Vs. Pegasus Presented By Travis Barker (Deluxe) seems more like a calculated move rather than a broad jump. Serving as both a deluxe album and the Ohio native’s entrance into the rock music genre, the album is star-studded affair and includes features from Machine Gun Kelly, blackbear, Scarlxrd, Zillakami and Chino Moreno.

The Diplomat’s luminary member, Jim Jones, has been on a creative up-kick since delivering his El Capo (Deluxe) album last year. In his latest release to permeate from within the walls of his Quarantine Studios, Jones is powered-up over the funky samples of Brooklyn producer Harry Fraud. Including his recent singles “Laps Around The Sun” and “Lose Lose” The Fraud Department, is home to 11-tracks and features from Conway The Machine, French Montana, Dave East, Curren$y, Belly and numerous others.

Rising Staten Island rapper CJ has experienced a little bit of everything while his torrential “Whoopty” wave was crashing ashore. Last month, when the track reached the No. 1 spot on Billboard’s Emerging Artist Chart, New York Drill rapper 22Gz likened CJ to infamous industry rat 6ix9ine. Now, the Warner Records signee seeks to capitalize on both the hype and negativity surrounding him with his eight-track Loyalty Over Royalty project that includes a lone feature from French Montana.

Last month, when Warner Records artist Lil Zay Osama released his aggressively menacing “61st To 64th” it marked the beginning of his hard-nosed album campaign. Now, the Chicago rapper has reached the pre-project promotional finish line and has accordingly pulled out the big guns for his Trench Baby album — that marks his return to crafting “pain” music according to press release from Warner. The 15-track effort is highlighted by numerous guest verses from rap stars such as Lil Tjay, G Herbo, Doe Boy and Jackboy.