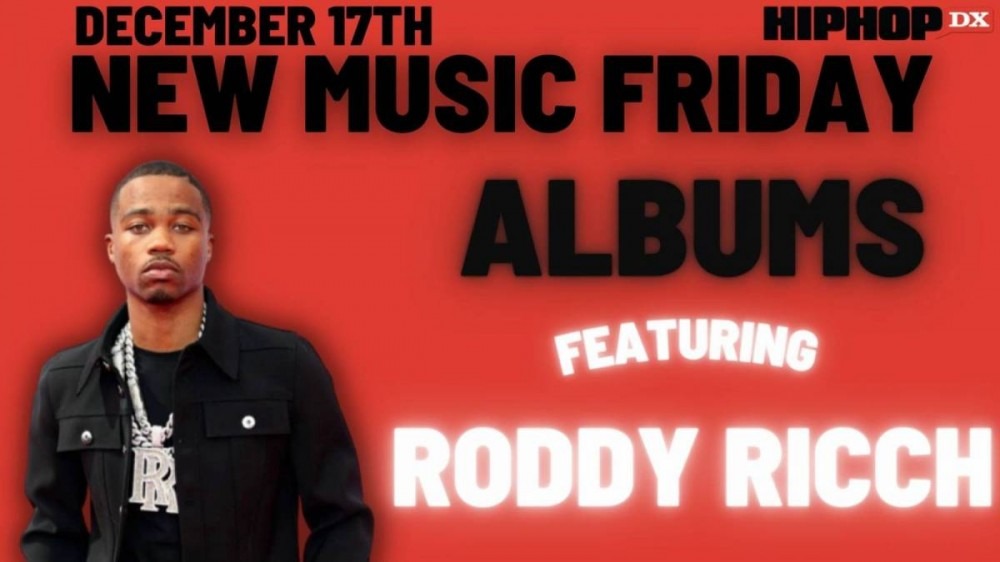 HipHopDX – With the Christmas holiday right around the corner, music fans are getting a batch of a few early gifts courtesy of some of the biggest rap artists this year in the latest edition of HipHopDX’s New Music Friday Albums coverage.

Delivering the follow-up to his Billboard chart-topping debut album, West Coast lyricist Roddy Ricch returns with a new body of work after a two year project drought. Elsewhere Gucci Mane and his fledging label the New 1017 get into the X-mas spirit with their compilation project, Chief Keef is making his way into the crypto arena with his non-fungible token release and Boldy James and The Alchemist connect for yet another rap-heavy collaboration album.

Dive into the full list of projects released Friday (December 17), below.

Los Angeles rapper Roddy Ricch has kept his fans on their toes for the majority of 2021.

Back in February, the multi-platinum lyricist piqued the interest of his fans by seemingly teasing his highly anticipated Feed Tha Streets 3 mixtape in a series of cryptic Instagram posts. Then in June he shared his moody “Late At Night,” single and connected with fellow L.A. native Bino Rideaux for their anthemic “Let Me Find Out,” banger.

Gucci Mane has been making moves with the artists he signed to the New 1017 record label all year.

With three compilation albums already in the bag in 2021 including So Icy Boyz (Deluxe), Wop has also continued to add pieces to the New 1017 label, having signed at least three new artists this year including Texas rapper Hot Boy Wes and up-and-coming Mississippi rap act BigWalkDog.

Considering Gucci Mane has always been a festive MC, showing his holiday spirit off on his longstanding East Atlanta Santa series, he’s opted to bring the gang with him for their So Icy Christmas compilation project.

The Glory Boys are soon to become the cryptocurrency boys in support of Chief Keef’s new music moves on the blockchain.

In addition to delivering his new 14-track 4NEM album, Chief Keef is serving up an NFT of the album artwork that will give holders of the token exclusive access to upcoming Web 3.0 experiences, and the ability to purchase physical NFTs representing real-world physical items and artwork.

Sosa is also in his -self-production bag throughout 4NEM, co-producing records with Akachi and Chello Beats, and has also recruited longtime collaborator Tadoe and DMV rapper Ballout for guest verses.

The Alchemist and Boldy James have built an incredible rapport with each other this year.

Picking up exactly where they left off in 2020 after joining forces for The Price Of Tea In China (Deluxe) album, Alc and Boldy once again set the backpack rap community of fire back in October with the release of their Bo Jackson project.

Finishing off 2021 with a lyrical bang, Boldy James fires off some of his most fierce bars o the year over a new batch of nine beats from The Alchemist’s endless stash of heat for his Super Tecmo Bo album.

After dropping his debut album Moon Boy in July, which includes features from Drake, 2 Chainz, Chris Brown, Big Sean, Jeezy and more, he snagged the crown for Best New Artist at the 2021 BET Hip Hop Awards. Not to mention he grabbed a “life-changing” feature from Drake in the process.

Following his announcement of his No, I’m Not OK EP earlier this week, Bleu shares the five-track offering intact with a guest appearance from R&B veteran Monica.

Akachi and ATL Smook have something to prove.

From his humble beginnings in Cape Cod to having already secured placements with artists such as Chief Keef, EST Gee and Joey Trap, Akachi has risen in the ranks as a producer in 2021 on the flip side, rising rapper ATL Smook has become a trending act this year off the strength of his double-album effort — which spaned his Astronaut Lingo project and most recent release, Playa Shit.

Taking hold of their own destiny, both Akachi and ATL Smook aren’t waiting for anyone to give them the Glory they deserve, and manifest the recognition they seek across their new nine-track collaborative release.

Rapper Awfm (A Werido From Memphis) has finally returned with SELLMORE, his first solo release since 2019’s You Goin To Jail Now.

Across the eleven song tracklist, Awfm continues to explore his odd and winding sound which borrows from spaced-out Southerners including YGTUT and Isaiah Rashad while never losing focus of an underlying Memphis bounce.

Highlights include “Broke,” “Turnpike 1 & 2” and the synth-driven “Valley,” but Awfm soars across the entirety of SELLMORE, marking a welcome return from the enigmatic rapper.