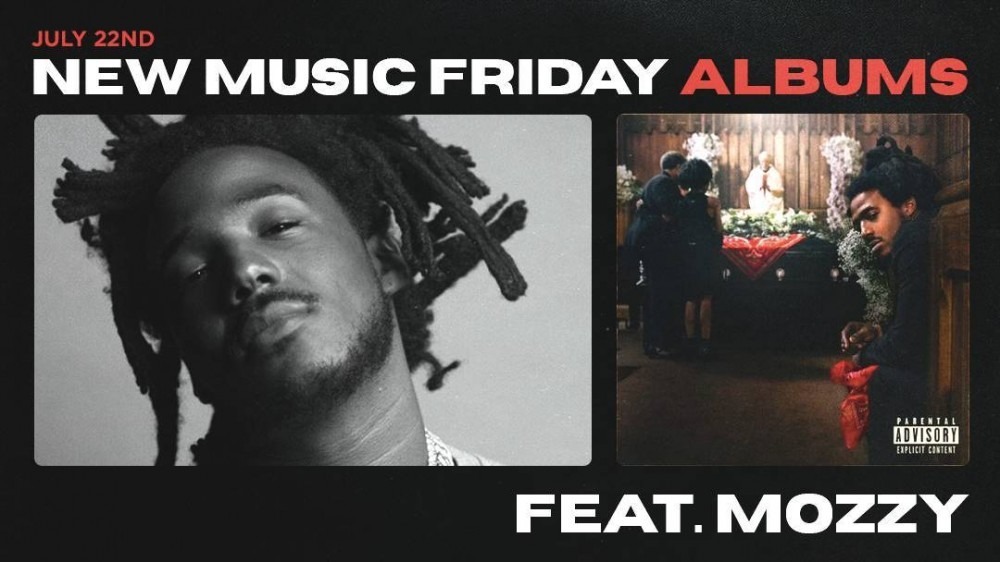 HIPHOPDX – The latest line-up of releases making their way to streaming services is staggering, to say the least. Multiple high-profile projects, including a posthumous release from Mac Miller, a surprise EP from Lil Uzi Vert and Joey Bada$$’s first album in five years, are on the radar for this week’s edition of HipHopDX’s New Music Friday Album coverage.

Following his 2 Chainz, YG and Saweetie-assisted “In My Face,” Mozzy delivers his debut effort for Yo Gotti’s CMG. Additionally, HipHopDX 2022 Rising Star Nardo Wick continues to write his legacy with a new deluxe project, while Warner Records artist Shordie Shordie shares the next chapter of his melodic rap-sung career.

There are also more releases from Flo Milli, RZA, Icewear Vezzo, Rico Nasty, Peter $un and more. Check out all of the albums that were released on Friday (July 22) below.

Throughout the past decade, Mozzy has solidified himself as the hardest working MC to break out from Sacramento. Since he delivered his Izziel Izzy Izie Izim album in 2011, the Hell Gang representative has gone on to release nearly 50 total projects — including his Untreated Trauma LP, which debuted at No. 19 on the Billboard 200 last year.

He’s also managed to create a healthy network of collaborators that includes the likes of G Herbo, Ty Dolla $ign, Wale, Blxst and YG, who he joined forces with for their 10-track Kommunity Service project that’s home to their fan-favorite banger “Perfect Timing.”

Now, with the backing of Yo Gotti’s CMG, Mozzy is prepared to become an even brighter star illuminating the skyline of Northern California’s Hip Hop scene with the arrival of his Survivor’s Guilt album. The 15-track project boasts guest verses from Roddy Ricch and Shordie Shordie, as well as fellow CMG labelmates EST Gee, Blac Youngsta and Moneybagg Yo.

Lil Uzi Vert is clearly winning at the game of life, but 2020 served as somewhat of a cheat code for the Philadelphia rap star. After taking over the airwaves with his chart-topping Eternal Atake LP, Uzi continued to apply pressure with the deluxe edition LUV Vs. The World 2 and his interstellar Pluto X Baby Pluto collaboration with Future.

However, 2021 proved to be somewhat of a transitional year for Uzi as he signaled the beginning of a new sonic era with the announcement of The Pink Tape and subsequent “Demon High” single. While a string of singles followed, the project has yet to be released and few details have been confirmed about the upcoming album.

It would appear that Lil Uzi Vert is back on track after his brief detour and has opted for a return to form by harnessing the power of SoundCloud with a barrage of exclusive offerings that date back to 2017 in preparation of The Pink Tape.

So much has changed since Joey Bada$$ released his breakthrough debut mixtape 1999 in 2012. Pro Era, the lyrical rap collective he entered the industry with, is somewhat of a distant memory. Joey also experienced the devastating loss of his partner in rhyme, Capital STEEZ, who committed suicide in December 2012.

The Brooklyn native has also enjoyed several highs, though, including his rise to stardom as an actor in widely popular TV series such as Mr. Robot and Hulu’s Wu-Tang: An American Saga.

Mac Miller – I Love You Life

As the fourth anniversary of Mac Miller’s tragic death approaches, it’s yet another reminder of the immense musical legacy he carved out during his short time on Earth.

His initial posthumous release, Circles, which arrived in 2020, uncovered yet another layer of musical depth to his already illustrious and multi-hyphenate career as an artist-producer. And naturally, the reissue of his Faces mixtape on streaming services last year helped reiterate the amalgamation of soul, jazz and Hip Hop that Mac was able to masterfully combine.

Continuing the effort to honor Mac Miller’s musical triumphs, his family estate has approved the streaming release of his sixth mixtape I Love Life, Thank You. Originally released in 2011, the 13-song effort served as the springboard to Mac’s “Road 2 a million fans” campaign, which saw the Pittsburgh MC release a new single for each 100,000 social media followers he accumulated.

For Nardo Wick, one of the 10 HipHopDX Rising Stars handpicked to shine bright this year, being somewhat underrated or overlooked is not an option.

After literally standing toe-to-toe with U.S. Marshalls, the RCA Record signee held his own with established stars such as Lil Durk, 21 Savage and G Herbo on his anthemic banger “Who Want Smoke??” The 20-year-old Florida rapper further proved his skillset with his impressive 2022 XXL Freshman Cypher, as well as his “Yeah Woah” collaboration with Big Scarr and Gucci Mane last month.

Maintaining the pressure he’s applied thus far, the “Me Or Sum” rapper delivers 12 fresh tracks as part of the deluxe edition of his 2021 debut album Who Is Nardo Wick??, which features verses from Latto, Lakeyah and The Kid Laroi.

The city of Baltimore is represented well by Shordie Shordie. After releasing his debut project Captain Hook, home to his double-platinum “Betchua (Bitchuary)” hit, the Warner Records signee continued down his path of commercial airwave demolition with a string of singles that include his fan-favorite “Both Sides” record, which doubles as one of the last Shoreline Mafia features before the SoCal rap group disbanded.

The hype of his consistent releases and uncanny cadence culminated in 2020 with the release of his 13-song >Muzic album, cementing his sound as a force to be reckoned with. And after fully expressing his sonic identity, Shordie Shordie truly reached new heights on his Murda Beatz-helmed Memory Lane project, which featured hits such “Doctors” and the Trippie Redd-leaning “Love.”

Once again showing his true colors as an artist, the captain of hooks himself has imbued his More Than Music, Pt. 2 with more of his melodic, street-ready and club-friendly vocals. Artists such as Offset, Mozzy and Rich Homie Quan provide guest support throughout the 17-track LP.

RZA – Bobby Digital and The Pit of Snakes