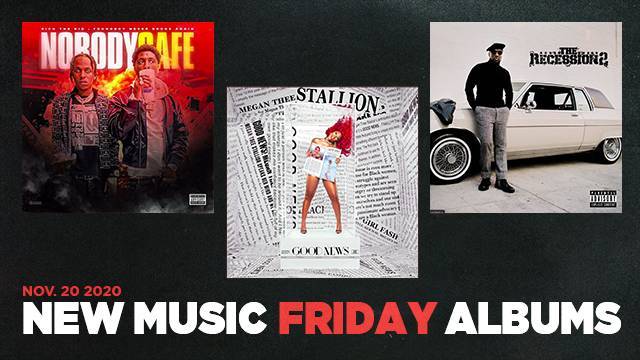 Check out the full list of featured streams below.

There has been a whirlwind of headlines surrounding rising star Megan Thee Stallion since reports broke that Tory Lanez allegedly shot her in the foot. Now, Hot Girl Meg plans to take control of the narrative with her debut album Good News. The project is overflowing with a-list features from the likes of DaBaby, Lil Durk, SZA, 2 Chainz, Big Sean and a host of others.

Following a historic Verzuz battle with TrapGod Gucci Mane, Jeezy is going a step further down the rabbit hole of nostalgia with the sequel to one of his early albums. However, with more than a decade in between the first installment of the series, The Recession 2 arrives in a completely different landscape in Hip Hop than its predecessor. Nevertheless, Big Sno managed to secure guest features from Rick Ross, Yo Gotti, E-40, Demi Lovato and many more.

Following a laundry list of collaborations, Rich The Kid and YoungBoy Never Broke Again collide head-to-head on Nobody Safe. There are only three features on the 15-song project, arriving via Rich Forever Music and EMPIRE imprints. Lil Wayne, Quando Rondo, and Rod Wave fulfill their roles toward the end of the tracklist.

SAINt JHN — While The World Was Burning

SAINt JHN let us know he was readying the release of his accidental album last month with his single “Gorgeous.” Now, the full and uncut body-of-work is here and we can indulge in each of the high-powered features that include A Boogie Wit Da Hoodie, DaBaby, Kanye West, Future, J.I.D, Kehlani, Lil Uzi Vert and 6LACK.

Meek Mill pops up with a surprise quick-hit effort with his Quarantine Pack. The Dreamchasers boss receives additional assistance from Lil Durk, 42 Dugg and Vory.

Coke Boys 5 is here and French Montana has assembled an all-star cast of rap royalty to contribute to the mixtape. Get ready for a literal rollercoaster ride because this project features everyone from late rappers Chinx and Pop Smoke to current artists A$AP Rocky, Curren$y, Jim Jones, Lil Durk, Benny the Butcher, YoungBoy Never Broke Again and so many more.

Berkley-based rapper Rexx Life Raj is embracing his floral tendencies on California Poppy 2. Considering the project is only eight-songs long, the two features from Juvenile and Kojey Radical hit just right within the grand scheme of things.

Topping off a trifecta of releases this year, Robb Bank$ has delivered his rugged, lo-fi trap album The Leak (Part 1). The album houses one lone feature from Lil Gnar and follows his projects No Rooftops 2 and Calendars from earlier this year.

This week our honorable mentions include albums from Foolio, YSN Flow, and Loski.