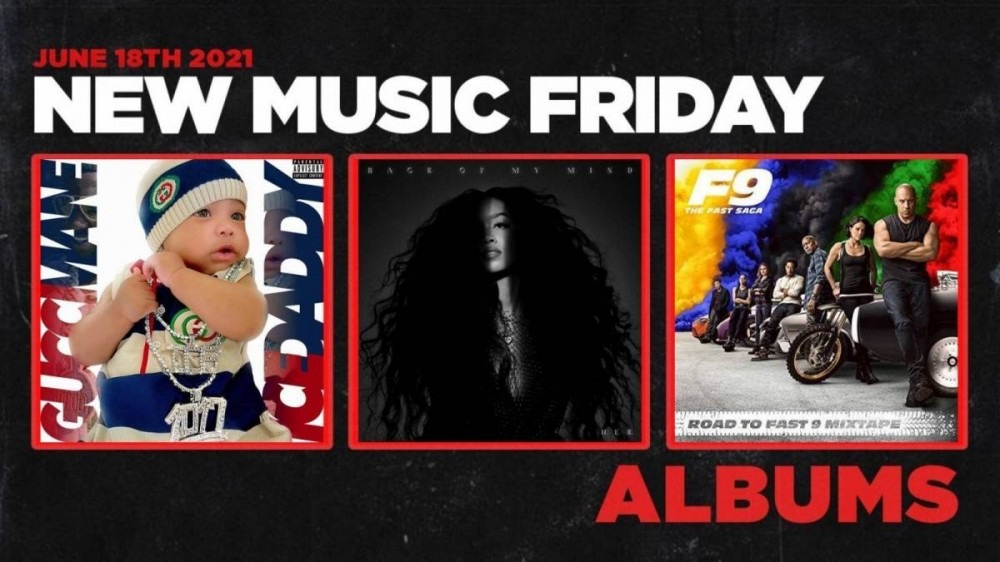 Every rap fan should be excited for this edition of New Music Friday. This week brought high powered collaborations from industry veterans and newcomers alike, plus a few strong albums from breakout artists.

To start, H.E.R. dropped Back Of My Mind and Gucci Mane just released Ice Daddy. There’s the F9 Soundtrack which brought a stacked lineup from Rico Nasty to Pop Smoke and HRSMN delivered The Last Ride, their first official album.

Coming out of Atlanta is Quality Control’s Metro Marrs with his new project Popular Loner while GoldLink released his first album in two years. This Friday also brought new music from South Carolina’s Dro Kenji in the form of Fuck Your Feelings, as well as My Struggle, the latest from Unfoonk.

We also walk through Sy Ari Da Kid’s Sy Ari Not Sorry, Migos Culture III (Deluxe) and many more. There’s something for everybody, so keep reading for the complete coverage of this week’s New Music Friday.

H.E.R. has been one of the most consistently excellent artists in all of R&B from her 2017 rebranded debut H.E.R. all the way to Back Of My Mind, the latest full-length release from the Bay Area singer. H.E.R.’s power ultimately comes down to the control she holds over her booming and powerful voice. She’s capable of shifting tones on a dime, from sweeping love ballads to delicate introspections.

Helmed by the lead singles “My Own” and “We Made It,” Back Of My Mind is a stellar comeback from an artist whom, aside from a few singles and features, has been reclusive sine 2019’s masterful I Used To Know Her.

The Migos may have just released an album, but nothing can stop this wave as they issue the deluxe edition of Culture III. Takeoff, Quavo and Offset have all found themselves in various degrees of scandals in the past few years, but it seems the Atlanta trio has put their heads down and focused on the music. Culture III (Deluxe) adds five brand new tracks to the tail end of the original nineteen. From the bouncy and mysterious “How We Coming,” produced by the illustrious Murda Beatz to the controlled chaos of “Menace,” the Migos are swinging for the fences.

Whether they end up out-battling Polo G’s Hall of Fame for this Monday’s top slot on the Billboard 200 remains in question. But one thing is clear: the Migos are back and as hungry as ever.

From the latest installment of the Fast and Furious franchise comes the soundtrack to F9: The Fast Saga, a high-fuel album full of top tier features. The fourteen-track compilation arrives on the heels of “Fast Lane,” the lead single featuring Don Toliver, Lil Durk and Latto. The full project is just as stacked, with Pop Smoke, Polo G, King Von, Trippie Redd and more all contributing verses.

Start to finish, the F9 Soundtrack is packed with chart-ready hits from an array of different voices. Hit play on “Speed It Up” from NLE Choppa and Rico Nasty or “Hit Em Hard” from Offset, Trippie Redd, Lil Durk, King Von and Kevin Gates for instant highlights.

Dro Kenji is a product of the world in which he was raised. His music, reminiscent of a post SoundCloud era, is flush with references to XXXTENTACION and Trippie Redd, but is dripping with originality. Backed by Internet Money and Nick Mira, Fuck Your Feelings is packed full of digitally lush instrumentals and Kenji’s versatile, bouncing vocals. On Fuck Your Feelings the young Kenji flexes the duality of his craft, issuing cold, clever bars alongside passionate melodies.

There’s plenty to praise within the album’s fourteen tracks, but clear highlights include the aptly titled “Trance” and the high-energy intro, “I’m Rich Now Bitch!.”

Gucci Mane has been one of rap’s most prolific creators throughout his entire career. He’s flooded the streets with music and in turn has built his empire. Big Guwop is back again with his latest album, Ice Daddy. The Atlanta kingpin is swinging for the fences on Ice Daddy, landing a mind-boggling array of features including the stars of the new generation, Pooh Shiesty, Lil Baby and Lil Uzi Vert, not to mention the legendary Project Pat and E-40.

Over the past year or so, Gucci has found himself as a capable A&R, signing, among others, Pooh Shiesty and HipHopDX Rising Star Foogiano to his 1017 label. Now, he’s reminding the world of his true talent: flexing a luxurious lifestyle through hard trap songs.

Metro Marrs, one of the more recent signees to Atlanta’s Quality Control record label, found himself in the media last May as news broke that he was arrested after throwing over ten thousand dollars in cash at his High School graduation. The young MC has since partnered with Cash App for a rainy day scholarship program, and now he’s released his debut mixtape, Popular Loner. Over ten tracks, Marrs showcases his unique sound, a blend of Atlanta trap and emotive crooning.

Getting arrested at his graduation was likely not on Marrs’ 2021 checklist, but the kid shows hustle: he’s already announced his plans to throw $20k at his brother’s graduation next year. Luckily, it seems the youngest QC member’s bankroll keeps growing.

One of Hip Hop’s greatest supergroups is back after a two decade hiatus. Composed of the legendary Rass Kass, Kurupt, Canibus and Killah Priest, HRSMN was far ahead of their time when what was to be the quad’s debut album was leaked and serially bootlegged. After stepping away from the group, the iconic collection of MCs is now back with The Last Ride. The Last Ride is a departure from the popular trends of Hip Hop’s current landscaping, instead relying on the staples of the genre: incredible beats and bulletproof bars.

With features from Planet Asia, Chino XL and more, The Last Ride holds plenty of nostalgia without sacrificing the quality expected from such generational rappers.

Earlier this week GoldLink unveiled his new single, “Raindrops” featuring Flo Milli. Now the DMV rapper is here with HARAM!, his first full-length album since 2019’s Diaspora. The rapper’s career entered rocky terrain following a controversial Instagram post following the untimely passing of Mac Miller. It seemed that the 28-year-old artist was struggling to break free from the negative attention, but on HARAM!, GoldLink seems like he’s back in his bag for the first time in years.

Five years ago, it seemed like a moonshot that Unfoonk would get to the place he is today. He was incarcerated, facing a weighty sentence of life behind bars. That is, until he received a call from his brother Young Thug, telling him to pack his bags: he’d be out in 2019. In the following years, Unfoonk went from the cell to private jets, gaining traction with singles such as “MOB Ties” and “Russian Roulette,” before landing the hit “Real” with Thugger from Slime Language 2.

The Young Stoner Life Records artist just dropped My Struggle, an album devoted to the struggle, and more importantly, the success he found in spite of it.

This week’s Honorable Mentions go to Rah Swish for Mayor Of The Streets, Not One Of Them from Dee Watkins, Chris Crack’s Sheep Hate Goats and Sy Ari Da Kid’s Sy Ari Not Sorry.