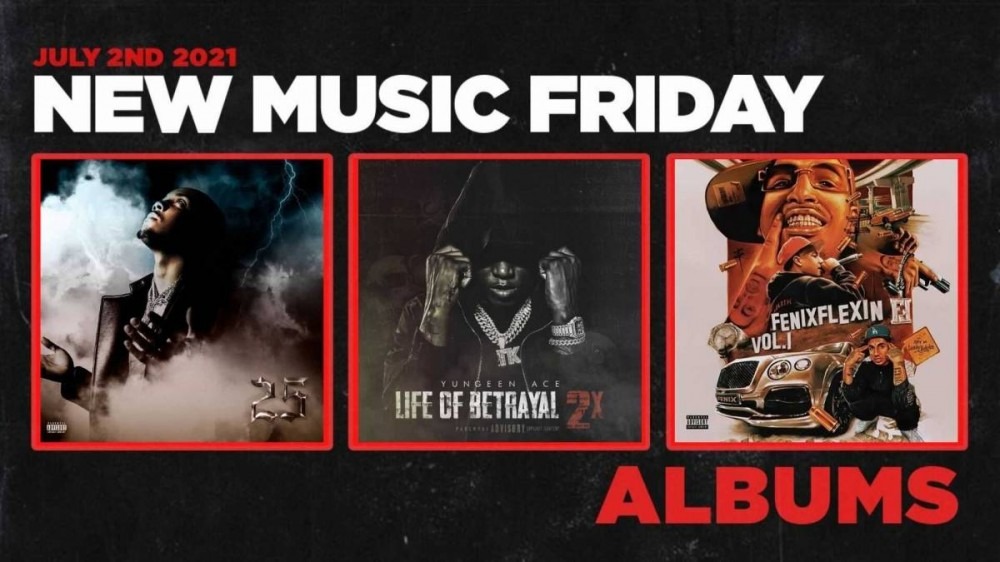 As this scorching heat wave continues to plague the United States, there’s never been a better time to sit down, cool out and listen to this week’s fresh batch of albums.

This edition of New Music Friday is eclectic; from the poignant drill of G Herbo’s 25 to the esoteric madness of Fatboi Sharif and Roper Williams’ Ghandi Loves Kids (Deluxe), there’s something for everyone.

Stay cool out there and continue reading for the complete coverage of all the best new albums released on this New Music Friday.

After his stellar verse on “Go Part 1” from Polo G’s chart-topping Hall of Fame, fans became less patient while waiting for for new music from Chicago’s G Herbo. Luckily, the wait is over as Herbo released 25, his first project since last year’s PTSD.

As Herbo celebrates his 25th birthday, he also remembers the struggles required to make it this far. The traumas of the streets continue to haunt the “Statement” rapper, but on 25, Herbo harnesses the pain and transforms it into heartfelt trap ballads. Topped off with features ranging from Rowdy Rebel and 21 Savage to Polo G and Gunna, 25 is almost as hot as the Chicago weather.

Yungeen Ace already has claim to one of this year’s catchiest songs in “Who I Smoke,” the viral diss track which placed the Florida rapper atop a Vanessa Carlton-sampled beat, but now he’s back with Life of Betrayal 2x, his first full-length album in just over two years.

“Expect the unexpected,” Ace claims on the opening moments of “Giving Up,” one of the project’s lead singles. Across Life of Betrayal 2x, Ace continually experiments stylistically, bending the boundaries of his melodic flow with creative samples. Along with “Who I Smoke,” highlights include the King Von-assisted “Hardaway” and “Choppa 4 My Enemies” with G Herbo.

From the chaotic and sprawling mind of Fatboi Sharif comes the deluxe edition of Ghandi Loves Children, a cryptic exploration into the horrors, humor and irony of modern living set to the ominous production of Roper Williams.

One of rap’s most fascinating and unique acts, Sharif follows no trends and no dogma. He hops between Williams’ slurred, spaced-out Boom-Bap production with irreverence, throwing references to serial killers, Kanye West and Christianity with a dark jubilee. The duo’s unencumbered and bold experimentation is best exemplified on “Fly Pelican” featuring New York’s YL and the intoxicating “Smithsonian,” but the entirety of Ghandi Loves Children warrants a thorough listen.

Hailing from Flint, Michigan, the Coochie Man also known as YN Jay is back. Coochie Chronicles, a collection of fifteen tracks dropped earlier this week, giving fans plenty more to dive into from the viral sensation.

The Michigan rap scene has been on fire, with rappers including YN Jay, Sada Baby and Icewear Vezzo receiving their due shine. On Coochie Chronicle, Jay channels the off-kilter bounce of MI rap with a healthy dose of his signature outrageous humor. Coi Leray, Rio Da Yung OG and Louie Ray all make appearances, so be sure to listen in-full to Jay’s first project of 2021.

Fenix Flexin has been in the game for years through his work with Shoreline Mafia, but now the Los Angeles rapper is stepping into his own lane. The fifteen tracks of Fenix Flexin Vol. 1, which arrived on July 1, is the debut mixtape from the Shoreline Mafia co-founder and includes features from Peso Peso, Drakeo The Ruler and many more.

Fenix slides across the new-age LA production from beat-makers including Cypress Moreno, FBeat Productions and DJ Flipp, bouncing like a hydraulic Impala. If you’re unsure of where to begin, press play on the standout track “Respectfully” with newly freed Drakeo The Ruler.