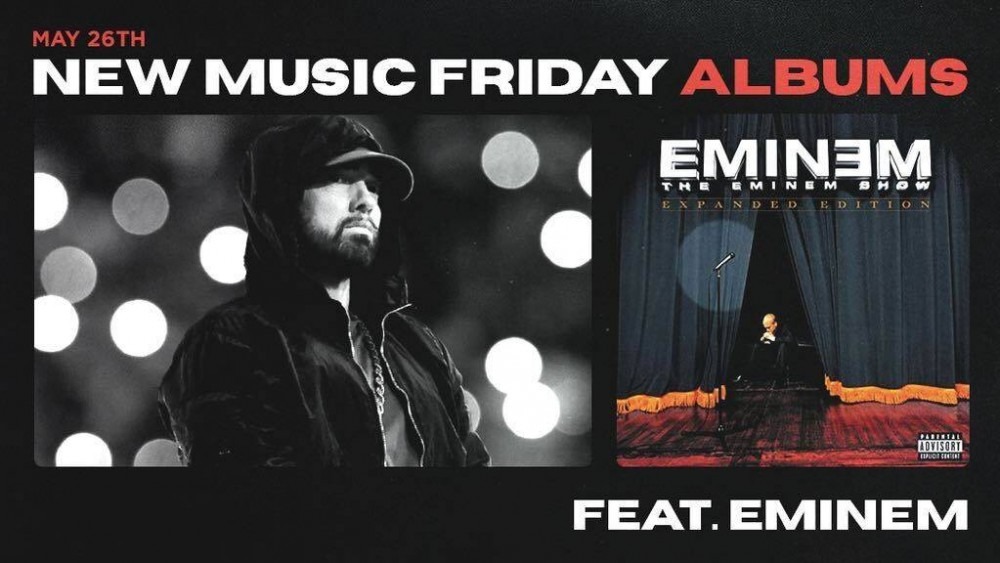 HipHopDX – It’s hard to think of anything besides the tragic mass shooting event in Texas just days ago, which left 19 children and two adults dead. That’s precisely why Kanye West pushed back his highly anticipated YEEZY Gap drop and artists such as 21 Savage, Missy Elliott and more have spoken out to condemn school shootings and make desperate pleas for the reform of gun laws.

Despite the dark cloud hanging over our nation, the silver lining is the fact that this week’s edition of HipHopDX’s New Music Friday Albums coverage includes a blend of new and old-school Hip Hop releases, including new material from OG artists such as Eminem and Sean Paul.

Other key releases include fresh material from Westcoast artist Jayson Cash, Millyz, Jelly and Pi’erre Bourne, among others.

Check out the entire batch of albums that dropped on Friday (May 27), below.

Detroit rap legend Eminem’s defining album The Eminem Show is getting a historic rework after originally being released 20 years ago in 2002.

On May 25 Eminem broke the news of the revamped version of the iconic Aftermath album on Twitter, revealing the reissued LP includes 18 bonus tracks, including four previously unreleased cuts, and instrumentals such as “Without Me,” “Sing for the Moment” and “Cleanin’ Out My Closet.”

Attached to the release is also a fair amount of Hip Hop history, due to the scathing “Bump Heads” Ja Rule diss record, which exists as a remnant of one of the biggest rap beefs of the early 2000s, and features verses from 50 Cent, Tony Yayo and Lloyd Banks.

Dipset rapper Jim Jones has been on a remarkable collaborative streak.

After connecting with SRFSCHL producer Harry Fraud for his 2021 album The Fraud Department, Jimmy doubled back and started this year off with his DJ Drama-helmed Gangsta Grillz: We Set the Trends project — which includes guest appearances from Icewear Vezzo, the Migos, Dave East, Giggs and more.

Following the inaugural “Lobby Boyz Anthem” single, and Meek Mill’s dirtbike cameo during a video shoot for the release, Jim Jones and Maino drop off their joint-effort album The Lobby Boyz. The 15-track LP continues the creative galvanization of Jim’s previous projects with the addition of features from artists such as BLEU, Fabolous, Styles P and Benny The Butcher.

Pi’erre Bourne’s Sosshouse record label has a promising future ahead of it due to rising artists such as Jelly.

Following the release of his Juicy J-assisted “Bubble Gum” banger, Jelly delivers his unfiltered 12-track The Wolf Of Peach Street album, which marks his third full-length release in 2022. Inspired by the cinematic portrayal of former Stock Broker Jordan Belfort by Leonardo DiCaprio in the film The Wolf of Wall Street, Jelly’s project encompasses the elements of hustling and scamming inherent to a fast-paced lifestyle in Atlanta.

Building on the vibes Jelly originally unleashed in 2020 with the first edition in the series, the album boasts nuclear braggadocious energy, which is personified by tracks such as “WYA” ft. Pi’erre Bourne.

California rapper Jayson Cash is putting on for the West Coast in a big way with his major-label debut album.

Following the success of releases such as his Blxst-leaning “Priority” single, the Carson native followed in the footsteps of late Victory Lap rapper Nipsey Hussle and inked a deal with Atlantic Records. He then proceeded to deliver incendiary freestyles for Real 92.3 LA’s Bootleg Kev & DJ Hed and Power 106 Los Angeles’ L.A. Leakers and verified his status as the next generation of elite lyricists from the city by securing a cosign and feature from Westside veteran Dom Kennedy for his radio-ready vibe “Him.”

Now, Jayson Cash is realizing his star potential with his 15-track Read The Room album, which includes additional guest verses from Kalan.FrFr and Major Myjah.

Massachutes-bred rapper Millyz has forged a wide-reaching network off of the strength of his ferocious lyricism.

After delivering his Blanco 4 effort last year, Millyz and Dave East connected for their collaborative Pablo & Blanco EP. He’s also taken his talents to Chicago, collaborating with G Herbo for their “Emotions” record and even made the jump across the pond to the U.K. — which resulted in a viral moment due to his appearance in London’s own Fire In The Booth freestyle series. Millyz’ proverbial world tour doesn’t let up with the release of his Blanco 5 LP either, which sees the East Coast MC joining forces with Long Beach icon Snoop Dogg and New York Hip Hopper Jadakiss, among others.

With over 26 million monthly Spotify listeners, Sean Paul is still one of the most relevant dancehall artists of this generation.

Though many of his seminal hits, such as “Baby Boy” featuring Beyoncé, reached their height of popularity in the early 2000s, Dutty Paul has maintained unparalleled relevance for decades, all while delivering new music like his 2021 Live N Livin album.

Out to prove he is still as sharp and creative as ever, the international popstar is putting his spicy Caribbean flare on modern tropes via his Scorcha album. The 16-song project is home to Sean Paul’s collaborations with Ty Dolla $ign, Gwen Stefani and Shenseea, Damian Marley and Nicky Jam and more.