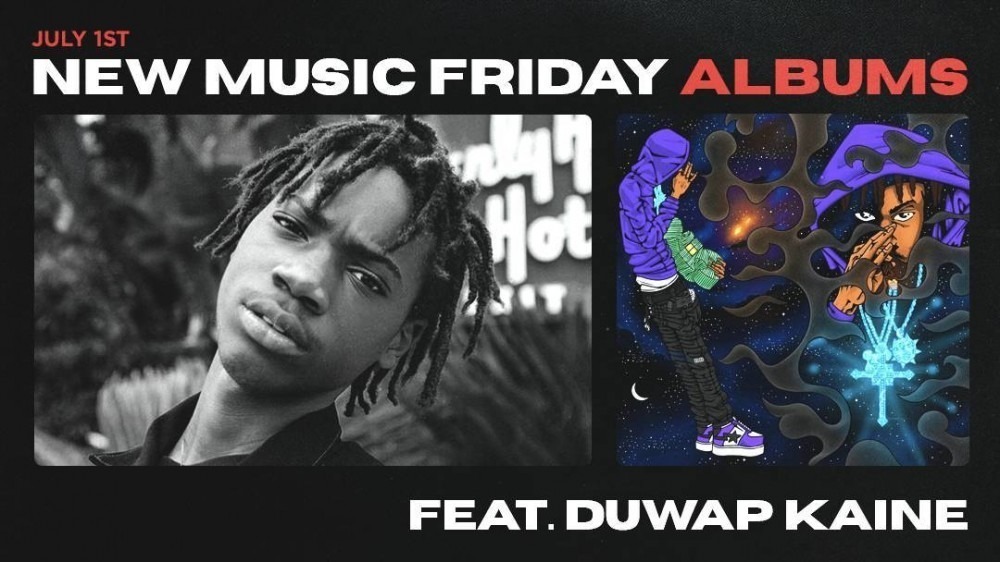 It’s a bit of a slower week on the album front, but that won’t stop HipHopDX from curating a list of essential listening on this edition of New Music Friday.

Kicking off the week is Savannah, Georgia’s Duwap Kaine with the frantic sounds of Faith Like Esther, his second project of the year following A Dogg’s Influence. From there we explore the bizarre collection of tracks which make up the soundtrack to Minions: The Rise of Gru, featuring breakout rapper Yeat.

French Montana and Harry Fraud’s Montega received the deluxe treatment this week, as did Atlanta duo Earthgang’s GHETTO GODS, which was originally released in February of this year.

Georgia rapper Duwap Kaine is nothing if not prolific. He already has one full-length project under his belt in 2022 and he’s added another in Faith Like Esther. Kaine’s frequent releases allow for more experimentation than an artist bound by limited releases. Given his wild approach, the results can be mixed: sometimes it works and sometimes it just doesn’t. Luckily for Kaine and his fans, Faith Like Esther is one of his best tapes yet.

Kaine doesn’t wait for the beat to open up: pockets in the production are merely suggestions which he rarely takes. His flow is frenetic and exuberant, frequently layering on itself and shifting from a slow crawl to an explosive rage at the drop of a dime.

Try to withhold your judgement for a while: we know how strange it is that the Minions have made their way to HipHopDX.

There’s been a handful of rap-fueled film soundtracks this year, most recently with Elvis, which featured everyone from Nardo Wick to Jazmine Sullivan, but Minions: The Rise of Gru Soundtrack is surely the most unexpected to champion rap. Produced by Jack Antonoff, the tracklist features, among others, contributions from Brockhampton, Kali Uchis, RZA, Thundercat, and Tierra Whack.

Earlier this month French Montana and longtime collaborator Harry Fraud linked up for Montega and, after a brief wait, they’re back with the album’s deluxe edition. Montega, one of Montana’s best efforts in years, reintroduced the Moroccan artist as a true rapper to a legion of young fans who only knew him through blockbuster hits such as “Unforgettable” and of course “No Stylist” with Drake.

The deluxe edition expands the original 12-song tracklist with two more listings, a small change that was clearly important for the veteran MC. Adding to the project, which already featured Babyface Ray, EST Gee, Rick Ross and more, are “Run The Bag Up” and “Everything I Do.”

Earthgang’s GHETTO GODS was one of the year’s most highly anticipated albums, so when it was delayed until this past February, folks were worried it was never coming out. Luckily for them it did and thrived as a fantastic follow-up to the collaborative LP Spilligion and 2019’s Mirrorland.

Now the two Atlanta natives are back with the deluxe edition to their latest studio album. Adding to the fun are Wiz Khalifa, Curren$y, Smino and more. Dreamville stans should be sure to tap in.

At the start of 2022 it was tragically reported that Houston rapper Sad Frosty had passed away at the age of 24-years-old. Inhabiting the border between satire and genuineness, Sad Frosty rose to fame through songs such as “Swerve,” “Ice Cream” and “Vitamin D.”

Led by the Chief Keef-assisted “GENGAR,” an energetic and malicious escapade, the late rapper’s estate has just released the posthumous album SANDBOX, a tape which offers a peek into what could have been if not for his untimely passing.

Adding to the names of prolific rappers dropping this week is Los Angeles’ own G Perico with 111th East. Perico, who makes a distinct variety of rap influenced by Traffic Music, along with L.A. greats such as Eazy-E, appears to be rejuvenated on his most recent tape which spans six songs and explores the smooth, sample-driven sounds of the late 1990s.

Be sure to stream Moor Mother’s Jazz Codes, this week’s Honorable Mention.