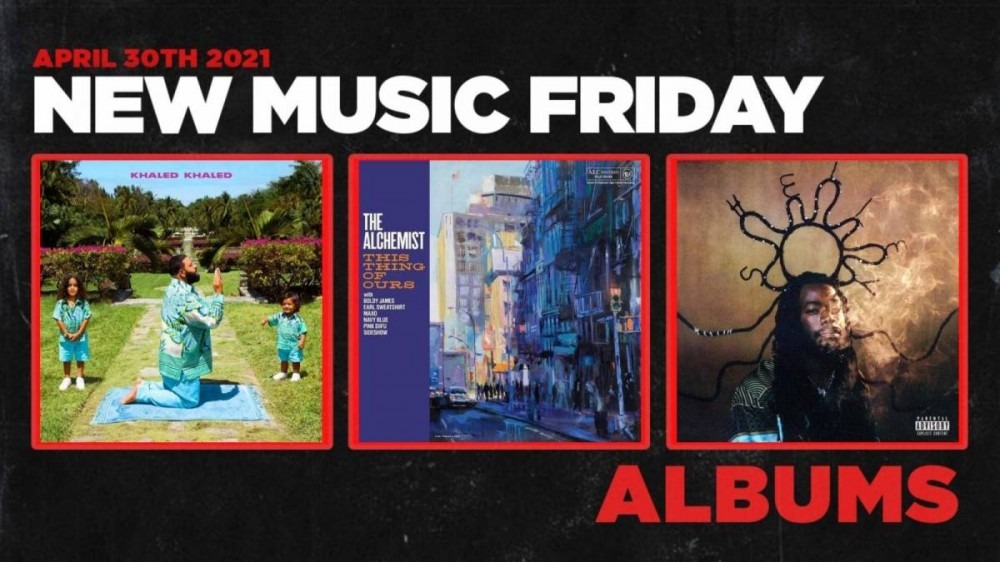 Los Angeles, CA – April has been a great month for new music and the final week is proving to be no exception, either.

Additional highlights include the long awaited Big Baby DRAM follow-up album from Virginia Beach talent Shelley FKA DRAM, a compilation album of lyrical acrobatics from The Alchemist, along with releases from Lil Eazzyy, AG Club, Yelawolf and numerous others.

Check out the full list of new albums that dropped Friday (April 30), below.

Everything about the rollout of a new DJ Khaled album is epic. His Khaled Khaled project may be one of his most over-the-top efforts yet, between the impact of his lead single featuring JAY-Z and Nas, emphatic reveal for Cardi B’s guest collaboration and surprise Kanye West exclusive breakfast eggs listening party boosting the hype of the record.

Nevertheless, as he has done previously on his his Billboard 200 Chart-topping albums Grateful in 2017 and the Igor foiled Father Of Asahd in 2019, DJ Khaled galvanized the top talent in the industry for Khaled Khaled across 14-tracks — including verses from superstars such as Drake, Migos, Post Malone, Lil Baby, DaBaby, A Boogie Wit Da Hoodie and more.

The Alchemist – This Thing Of Ours

Much like DX’s 2020 Producer Of The Year winner Hit-Boy, The Alchemist put forth a banner effort last year and contributed classic production on hallmark albums of artists such as Conway The Machine and DX’s 2020 Album Of The Year rapper Freddie Gibbs. And following two projects to kickoff 2021, including Armand Hammer’s Haram album, The Alchemist is circling the block with Earl Sweatshirt, Boldy James, Maxo, Pink Siifu and others as apart of his hybrid dungeon-raps instrumental This Thing Of Ours EP.

Serving as the christening of his physical, spiritual and profession transformation, Shelley FKA DRAM is not only the follow-up to the Virginia Beach artist’s 2017 Big Baby DRAM album, it’s the beginning of a new chapter for Shelley. Including “All Pride Aside With Summer Walker” the ten track album also includes Shelley’s recent singles “Exposure” and “Cooking With Grease” in addition to features from Erykah Badu and H.E.R.

Lil Eazzyy – Rookie Of The Year

With viral bangers like his G-Herbo-assisted “Onna Come Up (Remix)” becoming an unofficial a soundtrack for youth in Chicago and around the world yearning for drill-heavy music, Lil Eazzyy is perfectly poised to break into the industry with the dedicated following he’s earned from a sensational freshman performance. Following his recent collaboration with YBN Nahmir for his “Opp Stoppa  (Remix)” Lil Eazzyy recruits Tay Keith, Bizzy Banks and IV Jay for his 14-track Rookie Of The Year album.

Honorable Mentions this week include another project from Yelawolf, a re-up from Bay Area rap group AG Club, and new singles from Travis Scott, 21 Savage, Burna Boy and more.